The device is called the Zoo-Keeper Lionfish Containment Unit

, and word of mouth has turned it into a must-have Lionfish capture device for many recreational divers in the Caribbean and Florida. 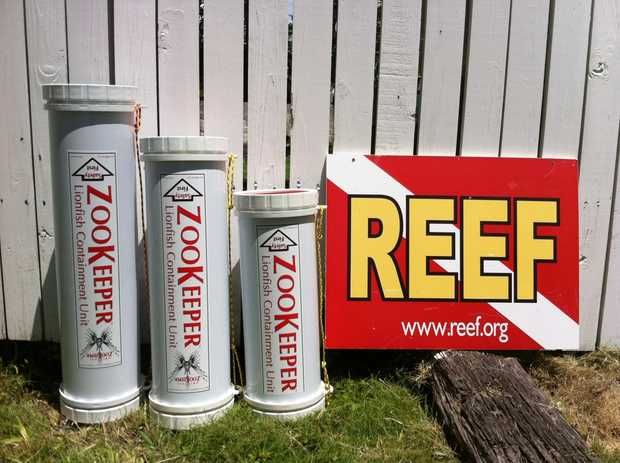 Sarasota entrepreneur Allie ElHage didn’t know anything about the lionfish until late 2011.

Four years later, after designing a device that divers use to safely contain the fish, which are festooned with venomous spines, he has become a central player in the effort to rid Florida and Caribbean waters of the invasive species from the Pacific Ocean.

The fish are gobbling up vast quantities of smaller fish that are important to the ecology of the state’s waters and taking a chunk out of the state’s grouper and snapper populations by devouring their young. Scientists encourage killing as many lionfish as possible.

“Right now, I am about a week behind, filling orders,” ElHage said recently. “Today, I got three e-mails for 42 units. I mean, it has gone absolutely nuts.”

In the Keys, lionfish have the potential to decimate the reef.

Ten years ago, there was no such thing as a lionfish hunt. But now, because the fish have no natural enemies in these waters, man is stepping in to try to control it, and the events, called derbies, have become common.

The fish are easy to spear and their fillets are great to eat. The biggest problem divers face is getting the fish into the cooler back on the boat without getting poked by one of the fish’s 18 venomous spines.

If you are lucky, getting stung by a lionfish spine is like a super-strong bee sting.

But it can be much worse. On ElHage’s first lionfish dive, off Curacao, he was 90 feet down when he got poked by six spines in the palm of his hand.

“That would be considered a really bad sting,” ElHage said. “The pain is almost instant. Kind of like someone pushing a red hot iron up through your arm. It hurts a lot.”

“My whole arm swelled up, from my shoulder to my hand, and was completely swollen for, like, 10 days.”

The ZooKeeper story started in 2011 when a friend on Curacao told ElHage about the fish.

ElHage, a U.S. citizen, grew up on the Caribbean island, then studied architecture in the U.S. He moved to Sarasota in 1998, where he made a living first as a spatial designer and then as a real estate speculator.

Related Post  Traps for Invasive Lionfish on the Horizon

ElHage met his wife, Angela Smith, in Sarasota in 2006. She is active in the business and thought up its name, which they have trademarked. Her rationale was that the name ZooKeeper opens up more marketing possibilities than a product tied to one species.

In 2009, following the real estate crash, ElHage moved back to Curacao, where he was marketing LED lighting solutions to businesses as a way of cutting their high electric bills when his friend challenged him to come up with something that would keep divers safe while they collected lionfish underwater. He came up with the ZooKeeper — a custom-extruded PVC cylinder with threaded ends.

Once he has a fish impaled on a spear, the diver pushes it through a flexible set of flaps shaped like a funnel on one end of the container. It is not difficult to pull the spear back out, but the lionfish remains trapped inside the hard plastic canister until the diver is ready to dump his catch into a cooler.

ElHage discovered the need for a second element — a water-displacement valve at the other end of the device — through his own scary underwater experience. He was diving, trying out a prototype.

When he shoved a big lionfish into the top of the container, two smaller ones he’d caught earlier popped out, propelled by the sea water being displaced by the bigger fish. One of them landed right between his eyes, fortunately hitting his dive mask and not his flesh.

After that problem was solved, news of the product’s effectiveness spread quickly.

“It was such a big hit, I decided to make it a full-time job,” ElHage said. In 2012, he tried making the ZooKeeper on Curacao but the complications of island life made it difficult. The couple moved back to Sarasota to make and market the product.

He owns the rights to the design of the injection molds that create the parts that screw onto the top and bottom of the canister and has a patent pending on his invention.

So far, the business is just the couple working out of their home and garage. Smith handles the books while ElHage handles assembly and sales. But a recent flurry of orders and a rapidly evolving distribution deal with a major scuba diver supply house could change that.

ElHage has developed a number of different models, with the average retail price around $112. At a big scuba diver trade show coming up in Orlando in November, he plans to broaden his lineup further. ZooKeeper puncture-resistant gloves, anyone? 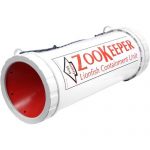 There has been a long ongoing debate about the availability of various seafood populations in all of Florida and the Florida Keys. There are several groups (they now call these groups “stake holders”) that have different opinions on how these populations are doing. Commercial Fishermen rely on plentiful catches and a thriving market with high…

Divers installed a bronze plaque last week identifying the final 250 of 1,000 contributors to a project that sank the former U.S. Navy ship Spiegel Grove 15 years ago as an artificial reef in the Florida Keys National Marine Sanctuary. On May 17, 2002, as the 510-foot-long former landing ship dock was undergoing final preparations…