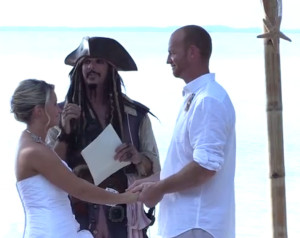 Islamorada resident Bill Camp works as a wedding officiant and gives clients the option of marrying them dressed as Captain Jack Sparrow, from the blockbuster movie franchise, “Pirates of the Caribbean.”

It was your typical white wedding on a Key Largo beach — until a pirate invaded the ceremony. Pirate Wedding.

The bride and the groom stood by the altar, with bridesmaids and groomsmen standing by their sides. Friends and family were seated. Then a man dressed as Capt. Jack Sparrow, from the Disney blockbuster franchise, “Pirates of the Caribbean,” sauntered down the aisle, heading straight for the wedding “officiant.”

“Oh, sorry to interrupt, are you the one they call Alicia?” he asked her. “I was walking through and someone said to give you a message. I don’t remember exactly what it was, but they said something to the regards of your vessel, or vehicle, and towing. And said you might want to attend to it immediately.”

The woman rushed out, and the pirate took her place.

“I am captain of a ship, and as captain, I can perform a marriage on this beach right now. So would you do me the honor, would you allow me?” he asked the couple. “Yes,” Tiffani and Ryan Sweeney answered amid laughter.

The man behind Jack Sparrow is Bill Camp, a resident of Islamorada and full-time wedding officiant. Camp has been working as a Jack Sparrow impersonator since 2005, when he lived in Washington. Although he started out doing children’s parties, nowadays he mostly does weddings and selected private events from Central Florida to the Keys.

“I’m 51, and I don’t want to run from kids in 98 degrees, full of clothing,” he said, with a laugh. Camp is a perfectionist. He pays attention to every detail of his Sparrow costume — from boots, vest, belts, pants, rings, wig and hat — and makes updates as new movies have come out. He carries a sword, non-firing pistols and a compass.

“I’m a little OCD about the whole thing,” Camp said. “People are paying for this, they should get the best I can do.” He starts his makeup with his teeth, blowdrying them, then painting some of them silver and gold. “You meet some guys that don’t worry about their teeth, but when they smile, then Jack Sparrow’s teeth aren’t there,” he said. “And some people will walk up and go, ‘Let me see your teeth.'”

Camp dyes his hair black and keeps his goatee trimmed just like the one actor Johnny Depp has for the movie role. He applies brown and gray makeup to his chest, arms and face, to make his Jack look a little dirty, but just enough. “He’s kind of a little dirty, but still cool-looking,” Camp said. “There’s a fine line between a dirty pirate and a coal miner.”

On his right arm, he has two real tattoos: One copies the character’s sparrow flying with a sunset background. The other is of the letter “P,” which in the movies is a pirate brand. “I was actually gonna get my teeth done gold and silver, too. I’m kind of glad I didn’t at this point because it isn’t the only thing I do,” said Camp, who also officiates weddings as himself, no costumes or makeup involved.

As he finished his makeup before the Key Largo wedding on a recent Thursday, he went in and out of character, practicing for the ceremony. When he’s Jack Sparrow, he pays attention to his speech, avoiding modern words like “OK.” He peppers his performance with inside jokes that fans of the franchise would recognize, and carries his speech in an old leather wallet he tucks inside his boot.

Nicole Allen, who lives in Singer Island, hired Camp to perform her wedding at Mallory Square in Key West in 2013. It was a themed wedding with a caricaturist, fortune teller and face painter. She recalled stumbling upon Camp’s Sparrow while looking for more entertainment for children. Upon learning he married people, she decided to surprise the whole party.

“Neither of us were tied to any religion,” Allen said. “We did not want a very traditional stuffy wedding.” Allen is now divorced, but she still remembers Camp’s performance with joy. “He was very in character,” recalled Allen, 39. “It was a little scary how good he was at it.”

Jack Sparrow is Camp’s first character impersonation. Prior to adopting the pirate persona, Camp said he worked as a musician. He sang and played the keyboard and the guitar in various rock bands in his hometown of Spokane, Wash., before starting a two-piece band with his wife, Bobbie Camp, in 1988.

His take on Jack Sparrow was inspired by a pirate-themed summer camp he helped organize with his wife for his church in Spokane.

The couple moved to different places but always dreamed of living by the ocean. They moved to the Keys in 2007, he said, and he began officiating weddings in 2008.

His character weddings through Captain Jack Events start at $450 for ceremonies in the Keys. The price increases if he needs to relocate or stay for the reception. His regular wedding business is called Simple Keys Weddings. And people can also hire him through his wife’s wedding planner business, Keys Breeze Weddings and Events.

Camp does about 120 to 125 weddings per year, he said, with 12 to 15 of those dressed as Captain Jack. Camp said many of his clients are getting married for the second or third time, and “they come from all over the U.S. and the world.”

“I’ve done stuff for people from Romania, the Netherlands and England and Scotland and France, and so it’s very cool,” he said.

The Sweeneys came from Sugar Grove, Ill. Their wedding in Key Largo was a classic, big white wedding, complete with flower girls (including the couple’s 1-year-old daughter, Keira, named after “Pirates of the Caribbean” star Keira Knightley) and a sand ceremony.

“The one that we’re doing today is one of my favorites. Nobody at the ceremony, except for a very selected few people, besides the bride and groom, know this is gonna happen,” Camp said before the ceremony. “One time, we did it this way and the mother of the bride got angry and she was looking for security to have me thrown out because she was convinced that the groom had planned this without the bride’s knowledge.”

Although in the beginning of the ceremony people tend to laugh at his jokes, Camp does a good job keeping his speech balanced. He typically begins the ceremony talking about ships, calm waters, bad weather and swords, and asks the guests to participate and sometimes agree with him by saying, “Aye.”

He tones it down when it comes to the vows, keeping the speech traditional, then drops mild jokes here and there through the rest of the ceremony.

“And now you have your very own jar of dirt,” he said at the end of a flawless sand ceremony.

“May the wind always be at your back and your seas always be calm. May your ship always bring you to ports of plenty,” he read during the blessing. Camp stayed for another hour at the reception, playing with children and taking photos with guests.

“Some people were surprised, some people were mad, because they thought I was gonna get mad,” said the bride, Tiffani Sweeney. “But that’s what we wanted,” Ryan Sweeney added. “That’s just kind of the way we are, aren’t we? We laugh, but we still love, and that’s what Mr. Sparrow brought to us, a little bit of both.”

Source: You can see a video of this here Florida man adopts Jack Sparrow persona to officiate weddings – Sun Sentinel