Here is a little Keys Humor, Jokes Cartoons and a Riddle

Speeder Joke A man was speeding down the Overseas highway, feeling secure in a gaggle of cars all traveling at the same speed. However, as he went through Layton, a locally well known speed trap, he was pulled over. The officer handed him the citation, received his signature and was about to walk away when the man asked “Officer, I know I was speeding, but I don’t think it’s fair – there were plenty of other cars around me who were going just as fast, so why did I get the ticket?” “I see by your gear you have been fishing.” the Officer said.

The officer grinned and added “Ever catch all the fish?” 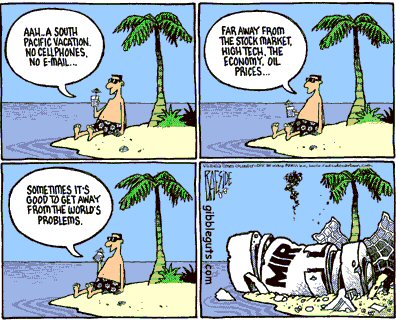 Why are dolphins smarter than humans?
Within 3 hours they can train a man to stand at the side of a pool and feed them fish!

A passenger on a cruise ship heading to Key West spots a bearded man on a small island, shouting and desperately waving his hands.

The passenger goes to the captain and asks: “Who is that?”

The captain says, “Beats me. Every week when we pass, he goes nuts.”

A third generation Cuban immigrant was walking along a Key West beach and stumbled across an old lamp. He picked it up and rubbed it and out popped a genie. The genie said, “OK, OK. You released me from the lamp, blah blah blah. This is the fourth time this month and I’m getting a little sick of these wishes, so you can forget about three. You only get one wish.”

The man sat and thought about it for a while and said, “I’ve always wanted to visit Cuba, my family’s birthplace, but I’m scared to fly and I get very seasick. Could you build me a bridge to Cuba so I can drive over there to visit?”

The genie laughed and said, “That’s impossible. Think of the logistics of that. How would the supports ever reach the bottom of the Atlantic? Think of how much concrete . . . how much steel. No, think of another wish.”

The man said OK and tried to think of a really good wish. Finally, he said, “I’ve been married and divorced four times. My wives always said that I don’t care and that I’m insensitive. So, I wish that I could understand women . . . know how they feel inside and what they’re thinking when they give me the silent treatment . . . know why they’re crying, know what they really want when they say nothing . . . know how to make them truly happy . . . .”

The genie grinned and said, “You want that bridge two lanes or four?” 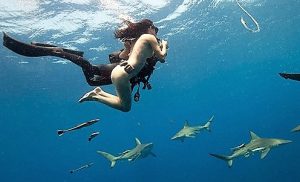 This fellow had owned a home on a large bayfront property in Marathon for several years. He built a nice beach and had it fixed up nice, picnic tables, horse shoe courts, basketball court, etc. The beach was perfect for swimming. One evening he decided to go down to his beach as he hadn’t been there for a while and look it over. As he neared the water, he heard voices shouting and laughing with glee.

As he came closer he saw it was a bunch of young women skinny dipping. He made the women aware of his presence and they all went out to deeper water. One of the women shouted to him, “We’re not coming out until you leave!”

The old man replied, “I didn’t come down here to watch you ladies swim, I only came to feed my sharks!”