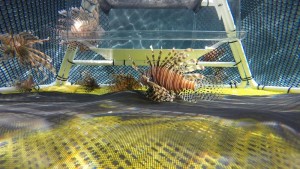 The fight to control the invasive lionfish is about to get real if Ft. Pierce divers Bob and Maria Hickerson have anything to say about it.

Hickerson and his wife — who run a series of highly successful lionfish derbies along Florida’s East Coast — also manufacture a popular line of lionfish harvesting gear, including spears and catch bags. Now the dynamic duo has set its sights on designing a trap that will bring economies of scale to the commercial harvest of what many scientists consider to be a major threat to the health of reefs throughout the Western Atlantic and Caribbean basins.

Lionfish are curious by nature. Clear panels have been fitted on traps to let them have an unobstructed view inside; once they determine it looks like a safe hiding hole, the fish start working their way around the trap to find an entry point. When they come to the “funnel,” they can enter the “foyer” of the trap, where a sensor system will run a pattern recognition program. If the computer recognizes the unique profile of a lionfish, the outside gate closes, and the inside gate opens. Once the fish enters the trap, the internal gate closes, and the external gate re-opens. If a non-target species, such as a snapper or grouper, tries to get in the trap, the gate system denies entry.

Initial trials began at the FIT Lab utilizing a pair of 4,000-gallon saltwater tanks, stocked with 14 lionfish captured live off the Treasure Coast. Trials lasted for approximately eight hours each, utilizing a pair of GoPro cameras to record results as Hickerson and his team changed entry configurations, shapes and claddings. The team logged over 500 hours in the captive environment and are ready for trials in the wild.

Source: Traps for invasive lionfish on the horizon