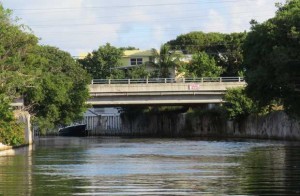 Construction on a new million-dollar bridge to carry pedestrians and bicyclists over “The Cut” through Key Largo likely begins this spring. When finished, the span will cross about 120 feet of water at the Marvin D. Adams Waterway at mile marker 103.6.

Monroe County Commissioners will consider contracts for construction of the $966,960 bridge during the commission’s Dec. 9 meeting at the Murray E. Nelson Government Center on Key Largo. The bayside bridge will be completely separate from the U.S. 1 bridges that carry vehicles over the historic boat channel that links.

The Adams Waterway pedestrian bridge, about 12 feet wide, will provide the last link in the Key Largo Bayside Shared Use Path, a six-mile paved pathway from mile marker 99.9 to 106.2, Monroe County Engineering Director Judith Clarke said. “We have that one spot where we needed to do something,” Clarke said Monday. The bayside trail, proposed a decade ago as part of the Key Largo Livable CommuniKeys Master Plan, is designed to allow pedestrians and bike riders to travel to nearby businesses and neighborhoods without venturing onto four-laned U.S. 1.

“There’s so much traffic on U.S. 1 now that anything we can do to make it safer for pedestrians is a plus for our community,” said Robert DiGiorgio of the Key Largo Downtown Association, which previously endorsed the bayside path. The better-known Florida Keys Overseas Heritage Trail runs along the oceanside of U.S. 1 on Key Largo. The bayside path “has been very well-received,” Clarke said. “We heard people were riding and walking along the base before we had a change to pave.”

But at the Adams Waterway, people still must use the shoulders of the highway bridges with traffic speeding nearby. “Bicycles are not supposed to ride against traffic but there’s no option” at the Cut, Clarke said.  The Adams Waterway is a narrow, half-mile-long channel dug in the late 1950s to connect Blackwater Sound to Largo Sound, greatly reducing travel time for boaters moving between Florida Bay and the Atlantic Ocean.

The Florida Department of Transportation has awarded alternative-transportation grants of about $475,000 toward construction and engineering of the Adams Waterway bridge, to be about 12 feet wide.

If commissioners approve awarding contracts, Monroe County will fund the balance of approximately $620,000 from its infrastructure sales-tax fund. Douglas N. Higgins Inc. of Ann Arbor, Mich., is the recommended contractor, with Parsons Brinckerhoff Inc. of Tampa proposed as the consulting engineer and inspector.

Precast concrete beams will be ordered once contracts are approved, Clarke said. Once the beams are delivered, about six weeks after the order is place, major construction will begin. That could happen before April, she said.

The new pedestrian span will be at the same height above water as the existing bridges. Due to the channel’s narrow width, no fishing will be permitted from the bridge.