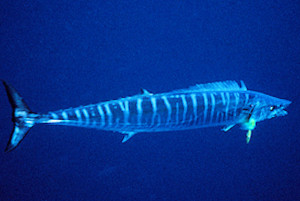 Nash, A., J. Whiting, and B. E. Luckhurst. 2002. A pneumatic cradle for handling and tagging of wahoo and other large pelagic fishes. American Fisheries Society Symposium 30:189-194.

FWRI scientists are investigating the biology of Florida wahoo. This research will provide important information regarding wahoo age, growth, and reproduction.

The wahoo, Acanthocybium solandri, is the largest of all mackerels and is found worldwide in tropical and subtropical coastal waters. According to the International Game Fish Association, the official record for the largest wahoo caught on hook and line is 158.5 lb (71.9 kg). However, uncertified reports indicate wahoo may reach a maximum size of 200 lb (91 kg) or more. Typically, anglers troll for wahoo in the offshore waters where the pelagic species lives.

Wahoo is an important fishery species. It tastes good and is an excellent game fish due to its size, lightening fast runs, and fighting ability. In Bermuda, for example, wahoo is the single most important fishery species by weight. In Florida, recreational anglers have caught an average of around 30,000 wahoo each year since 1981. Florida’s commercial fishery lands an additional 73,000 pounds of wahoo each year.

Despite the importance of wahoo fisheries to many regions of the world, there is relatively little available scientific information on which to base management of the species in Florida. In earlier studies, researchers found it difficult to get sufficient numbers of fish because wahoo are solitary in nature or occur in small groups. The most significant study to date, which collected wahoo in North Carolina, dates back to the 1960s and early 1970s. Several hundred fish were examined, but this required several years of collection effort. There are many fundamental questions about the wahoo life cycle. Biologists do not know how fast wahoo grow or how long they live. Wahoo may grow very fast and die young, but right now, researchers do not know. To better understand wahoo, biologists at the Florida Fish and Wildlife Conservation Commission’s Fish and Wildlife Research Institute (FWRI) have begun to investigate the life cycle of wahoo off the east cost of Florida and in the Bahamas. This three-year study is funded by a grant from the National Marine Fisheries Service Marine Fisheries Initiative program. 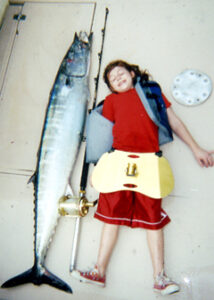 To get as many valuable wahoo samples as possible in a single day at a single location, researchers have targeted tournaments for this study. The samples taken at these tournaments will provide important information on age, growth, and reproduction-without affecting the fillets or steaks. Additionally, carcass drop-off sites have been established at five locations in southeastern Florida.

Several parts of the wahoo that can potentially be used to age the fish include fin rays, fin spines, scales, vertebrae, or the miniscule otoliths, all of which grow as the fish grows. If biologists have asked if you mind having the top of the head cut off your fish, the researchers were likely trying to find the tiny otoliths (less than ¼ inch wide) inside the head. FWRI’s Age and Growth Lab uses otoliths, or earstones, to determine the age of a fish. Otoliths provide a record of a fish’s growth in annual bands that can be counted with the aid of a microscope. Age information can be combined with size and reproductive data to provide basic life history information: how old wahoo get, how fast they grow, when they become sexually mature, size differences between sexes, when and how often they reproduce, and the number of eggs produced by an individual.

Wahoo is currently not a managed species in the state of Florida or the regional fishery management councils. However, the Secretary of Commerce recently approved a fishery management plan drafted by the South Atlantic Fishery Management Council (http://www.safmc.net). The Fishery Management Plan for the Dolphin and Wahoo Fishery of the Atlantic, Caribbean, and Gulf of Mexico identifies the need for estimates of growth, reproduction, and other factors about wahoo to better understand the effects of possible fishery management options. FWRI’s wahoo study responds to this need for more and better data. This study will benefit the fish populations and those who fish for wahoo, because future management options can be better matched to evident trends for wahoo and its fishery. So far, tournament committees and participating anglers have been highly supportive. Anglers who continue to help through donating samples from wahoo catches will make the study even more successful.

Fishing is a key component of the Florida lifestyle as well as the state’s economy. But fishing line and other fishing tackle frequently enter Florida’s aquatic systems as a result of incidental snags or improper disposal. When left in the aquatic environment, fishing line and tackle create potential traps for unsuspecting wildlife that can become…

In this episode Kasey and I travel to the Hawks Cay Resort in the Florida Keys. The Keys are hold several different species of pelagic. However the one fish we had in mind was the “Silver King” Florida Keys Tarpon. Enjoy our journey in tackling this monster fish. You can also Feed Tarpon at Robbie’s…

This closure includes all state waters south of Cape Sable, which is on the Gulf side of Florida, and up the Atlantic coast. The Keys/east Florida hogfish season runs from May 1 through Oct. 31.