After a several-year hiatus, state fishery managers will again address the topic of reopening the Goliath grouper fishery. The fishery was closed in 1990 due to extreme overfishing. 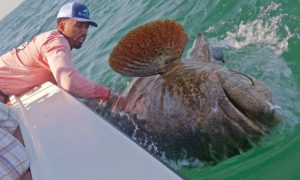 Next month, the Florida Fish and Wildlife Conservation Commission will hear a presentation from fishery biologists and will begin to discuss possibly opening up the fishery to a limited harvest. The FWC board will discuss the issue when it meets Feb. 8 in Crystal River. The issue has been controversial in the past and could dominate FWC meetings for the next year.

The FWC and the South Atlantic and Gulf of Mexico fishery management councils impaneled a committee to research reopening the fishery in 2014, but the committee could not reach any consensus on a plan that would allow even a harvest for scientific purposes. Twice in the past 10 years, fishery managers have attempted to conduct stock assessments of the fish without having to kill them, but each time the assessments were deemed not scientifically or statistically valid.

The question of whether Goliath Grouper has fully recovered remains unanswered.

“Goliath grouper have a number of severe data limitations that make completion of a quantitative stock assessment pretty much impossible,” said FWC biologist Luiz Barbieri, who conducts stock assessments. “Although there are serious information gaps on their biology, the main issues with the stock assessment are the lack of reliable indicators of population abundance over their entire range. The existing data comes from South Florida and are not representative of the whole population.”

Developing surveys to obtain better abundance data would be extremely costly and are not guaranteed to solve the problem, Barbieri said. “Although the data we do have indicate that abundance has greatly increased since the fishery was closed in 1990 and suggest the stock could be already recovered, the bottom line is that without a valid assessment we do not know whether the stock has reached the level considered sustainable,” Barbieri said.

The “sustainability bar” for Goliath grouper is higher than for many other species given their vulnerability to exploitation and to seasonal mortality events such as red tides and cold kills, Barbieri said.

In the past 10 years, fishermen have complained that the stock has recovered and they can’t fish some wrecks or reefs without having the large fish steal small snappers and groupers off their lines. The fish has become a nuisance, they claim. Some fishermen have called for limited fishery in which tags would be issued through an annual lottery system. An annual tag would entitle fishermen to one Goliath grouper. The fishermen would be required to photograph, weigh and measure the fish, they said. 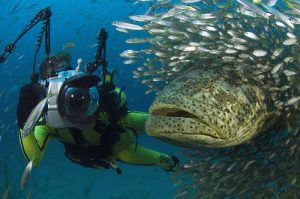 The dive community contends that the large fish are a major draw for divers and are worth more alive than dead. Two dive certification companies paid for a recent economic study of the Goliath grouper’s impact on Florida’s dive industry. The study found that the value of a Goliath grouper encounter during a dive is approximately equal to the value of five shark encounters. “Recreational divers with Florida residence in our study were willing to pay almost $90 on a drive trip for the first Goliath grouper sighting, while non-Florida residents were willing to pay almost $156,” the study stated.

Adding to the dilemma of opening the fishery is high levels of mercury found in the Goliath groupers. Chris Koenig, a leading researcher of Goliath groupers, called it irresponsible to allow consumption of the larger Goliath groupers because of high concentrations of mercury found in the fish. The levels are “extremely high,” and “increase with size,” Koenig said. If allowed, the fishery would have to be “very limited” and “carefully monitored,” with only the smaller juvenile fish harvested for consumption, he said.

When the fishery was closed in 1990, Goliath groupers number were so low that there was little resistance to the closure. Technological improvements in spearguns and diving equipment in the 1960s and ’70s made no wreck, cave or hole safe for Goliath groupers to hide. They have few natural predators and little fear of divers.

The lumbering fish’s enormous size, slow growth, low reproductive rate and spawning behavior have made them especially susceptible to overfishing. The fish do not spawn for the first six to seven years of their lives, making recovery for the species slow, Koenig said.