Skip to content
Few want to publicly talk about killing iguanas, yet it’s a common practice. Iguana hunting on private property — whether your own or someone else’s with explicit permission — is perfectly legal in the Florida Keys with a few caveats. 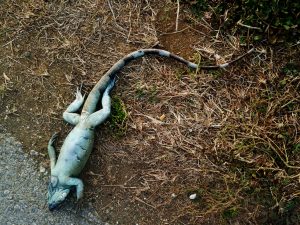 “You can kill it, but it has to be quick and immediate,” Sheriff Rick Ramsay said. “One B.B. is not going to kill an iguana. If you had a high-powered pellet gun, a shot in the head could kill it right away. If you hit it and it’s crawling and you have to keep shooting it, you’re technically in violation of state law for cruelty to an animal.”

So while no state law or regulation protects the iguana or requires any permits or license to hunt them, iguanas cannot be treated with “excessive or repeated infliction of unnecessary pain or suffering.” Florida defines an animal “to include every living dumb creature.”

Anyone who “unnecessarily overloads, overdrives, torments, deprives of necessary sustenance or shelter, or unnecessarily mutilates or kills any animal” faces a criminal misdemeanor charge that carries a $5,000 fine. Do it intentionally and prosecutors can go after you with a felony charge that carries prison time or a $10,000 fine, the law states.

Ramsay said his office is not advocating anyone fire on an iguana, but he was clear about his interpretation of Florida firearms law. State law bans pulling the trigger on a firearm in public — not on private property if it’s done without reckless endangerment, he said. An air gun is not a firearm under state law since it lacks an “explosive” mechanism.

But if done without any recklessness or danger to others, that same property owner could wield a 9mm handgun on an intruding iguana, Ramsay said. “I’ve never shot one,” Ramsay said, adding that his Marathon home is riddled with the lizards. “My neighbors hate them. I don’t bother them and they don’t bother me. I like animals. If I shoot something it’s because I’m going to eat it.”

Ramsay’s take on the state firearms law didn’t go over well with the Key West police department. The idea of people in tightly clustered Old Town taking aim at iguanas with their trusty .38 revolvers clashes with the idea of public safety, police officials said. “If you’re firing a firearm in your yard, there’s a good likelihood you would meet a police officer,” said Alyson Crean, spokeswoman for Chief Donie Lee, after reviewing Florida statutes.

“Everything is officer discretion, it’s case-by-case,” Crean said. “Key West is much more densely populated than most of the county. Pellet guns, air guns by an adult in a private yard are legal. Firing a firearm in your private yard, that could be considered to be reckless and negligent.”

Ramsay recalled a couple of grisly reports over the years in which someone’s neighbor was accused of failing miserably at humanely killing an iguana. In one case, he said, the complaint was that a garbage bag was “still moving” after a man dumped an iguana he had maimed.

But a check of the circuit court docket showed that a couple of high-profile charges of misdemeanor animal cruelty involving iguanas went nowhere. Prosecutors and animal control officers say no cruelty case is easy to see through.

On July 1, 2011, a Key West police officer arrived at a New-Town home to find a man bleeding from his neighbor’s attempts at shooting an iguana that was devouring a fruit tree. A paramedic removed a pellet from a small puncture wound in the man’s left temple.

The cop confiscated the Winchester .177 Air Soft Rifle and tagged it for destruction, but no arrests were made, the incident report stated. The bleeding man didn’t want to press charges and refused to go to the hospital.

In September 2012, a police officer stopped a man in the 1000 block of Simonton Street and found two live iguanas in his backpack, along with a box cutter. One lizard was missing a chunk of his tail and the other had a broken leg, reports stated.

Police were responding to a call from the now-defunct trailer park that men were shooting at iguanas. The iguanas, which the man said were meant for dinner, were taken to the Key West Wildlife Rescue at Indigenous Park, the officer said.

Florida Fish and Wildlife Conservation Commission doesn’t have guidelines on how to humanely kill an iguana, former state iguana trapper Chris Guinto said, but the rule of thumb is to follow the American Zoological Association’s suggestions.

“Blunt trauma force to the brain,” he said, quoting the definition of a humane, clean iguana kill. Still, the veteran iguana trapper has this to say to Key West poolside pellet gun shooters. “You cannot shoot them,” Guinto said. “You will never get the brain and they will walk away.” But that point-blank, close to the top of the forehead shot is the kind of job Guinto pulled off for years.

Throwing an iguana into a freezer is torture, not euthanasia, said both Guinto and veterinarian Doug Mader, along with decapitation or repeated shots to its body.

“I’ve seen X-rays with 40 to 50 pellets in an iguana,” Mader said. “Very few people in the Keys are talented enough to kill with one shot. I would say call a professional exterminator, one required to euthanize them humanely.”

Mader doesn’t recommend iguanas as pets, citing the male’s combativeness during mating season and its aggressive reputation. The veterinarian, however, finds turning the hose on an iguana’s eggs buried in the ground a suitable form of euthanasia. “A really humane way to control them is to drown the eggs,” Mader said. “Find the nest in your yard that’s two to three feet deep.”

Neither expert would divulge how to efficiently, and with the least amount of pain, end an iguana’s life with a pellet gun or other weapon.

But anyone with access to Youtube or a veteran iguana hunter can learn the dubious secret: Iguanas have a gland that can be colored orange or white on their foreheads, a spot nicknamed its “third eye.” The gland works similarly to a motion-sensor, helping the iguana figure our temperatures, and pick up on stalking signals. A blunt strike to that gland, in the form of an air rifle’s pellet, is considered by those who care to be the most humane form of execution.

A video reportedly from Guyana shows a young man using a knife to pierce the skin atop the iguana’s “third eye,” before he deftly stabs a thin spike into its head.

The iguana doesn’t move once the man punctures its head.

Only a veterinarian or someone who is board-certified by the state to handle the proper drugs can legally perform a lethal injection on an iguana, Guinto said.

BY BRIAN BOWDEN Free Press Staff  The Upper Keys is playing a role in an effort by the National Park Service to bolster the population of the federally protected Schaus swallowtail butterfly on Biscayne National Park’s Elliott Key. The 4-year-old restoration project has three simple goals: remove invasive species from the island, plant natives such…

Look out and slow down for manatees in November to help them as they begin migrating to warmer waters. November is Manatee Awareness Month. Florida has more than 6,600 manatees swimming in rivers, bays and coastal waters. These large aquatic mammals can weigh over 1,000 pounds. As the weather cools, manatees are on the move,…

Florida Keys National Marine Sanctuary officials are encouraging divers and snorkelers to have a low-impact lobster mini-season when they take to the waters on Wednesday and Thursday in search of bugs. Lobster mini-season, commonly referred to as sport season, is one of the busiest times on the ocean in the Florida Keys, as thousands of…