Nursery-grown elkhorn coral transplanted into Dry Tortugas National Park survived and thrived, growing twice as fast as corals planted in other locations in the Florida Keys, according to a new U.S. Geological Survey study published in Endangered Species Research.

USGS researchers are studying the growth and success of nursery-grown transplanted corals in the Florida Keys; research that might help this population of the threatened species rebound. Reefs there have experienced significant coral loss in recent decades from coral bleaching, disease and human-related disturbances. Elkhorn coral, listed as threatened under the Endangered Species Act, is of special concern because it is the only species that builds the reef-crest zone—the part of the reef that dissipates waves, protecting shorelines and creating habitat for other species—in the tropical Atlantic.

Tall, branching elkhorn corals once were abundant in parts of the Keys, but in 1982-1983 the population crashed across the entire western Atlantic due to white band disease, which is caused by an unknown pathogen. Scientists don’t fully understand why the species has not recovered since then, but population fragmentation, climate change and other coral diseases have all played a role.

The new elkhorn coral colonies planted in the park, which lies about 62 miles west of Key West, may act to “genetically rescue” the one remaining genetic strain known to persist in Dry Tortugas National Park.

Corals are animals, not plants as they may appear. Most are colonial, and colonies can contain hundreds of thousands of individual polyps. Elkhorn corals do not self-fertilize, so providing potential mates could allow the existing colonies, which are all genetically identical clones, to start sexually reproducing again. Insights from the USGS study may lead to management strategies that could revitalize elkhorn populations along the Florida Keys reef tract.

“Our study shows that bringing in nursery-grown elkhorn coral fragments can boost the odds that these colonies can cross-fertilize and eventually produce an abundance of coral larvae,” said USGS research marine biologist Ilsa Kuffner, the lead author of the study. “Since the Florida Current flows from the Dry Tortugas toward the main Keys reef tract, elkhorn larvae from the Dry Tortugas could be carried by currents and re-seed other parts of the reef tract.”

Elkhorn coral is critical to reversing coral-reef ecosystem collapse in the Keys. Coral reefs are also an important habitat for marine biodiversity that supports regional economic drivers such as diving and tourism, and recreational and commercial fishing. To help restore this once-abundant species, Keys conservation groups raise elkhorn coral fragments until they are large enough to be planted on the reef tract. The USGS experiment studied which genetic strains of nursery-grown corals grew the fastest and where—knowledge that could help restoration groups jump-start natural reproduction.

Most corals can reproduce either by fragments breaking off from a colony and forming new colonies that are genetically identical to their parent; or sexually by releasing eggs and sperm into the water, where they meet and fertilize to produce larvae. Sexual reproduction blends genes from parent corals to produce unique individuals, leading to genetic variations that can help coral populations adapt to changes such as warmer waters, increasing ocean acidity or new coral diseases. But genetic recombination only happens when two genetically different corals are close enough for their eggs and sperm to meet.

To determine if some elkhorn coral strains are more resilient than others, or whether some Keys sites are more hospitable, USGS coral scientists received permission from Biscayne National Park, Dry Tortugas National Park and the Florida Keys National Marine Sanctuary—part of the National Oceanic and Atmospheric Administration’s Office of National Marine Sanctuaries—to conduct an experiment using nursery-grown fragments donated by the Coral Restoration Foundation.

In April 2018, the USGS team transplanted fragments of five genetic strains from the Upper Keys onto two sites in the Upper Keys, one site in the Middle Keys and two sites in the Dry Tortugas. Two fragments from the last remaining genetic strain in the Dry Tortugas were also planted at both Dry Tortugas study sites for comparison. The experiment spanned 200 miles of the Florida reef tract and involved a total of 54 coral fragments. From May 2018 to November 2019, scientists repeatedly weighed, photographed and measured the corals to monitor their survival and growth. 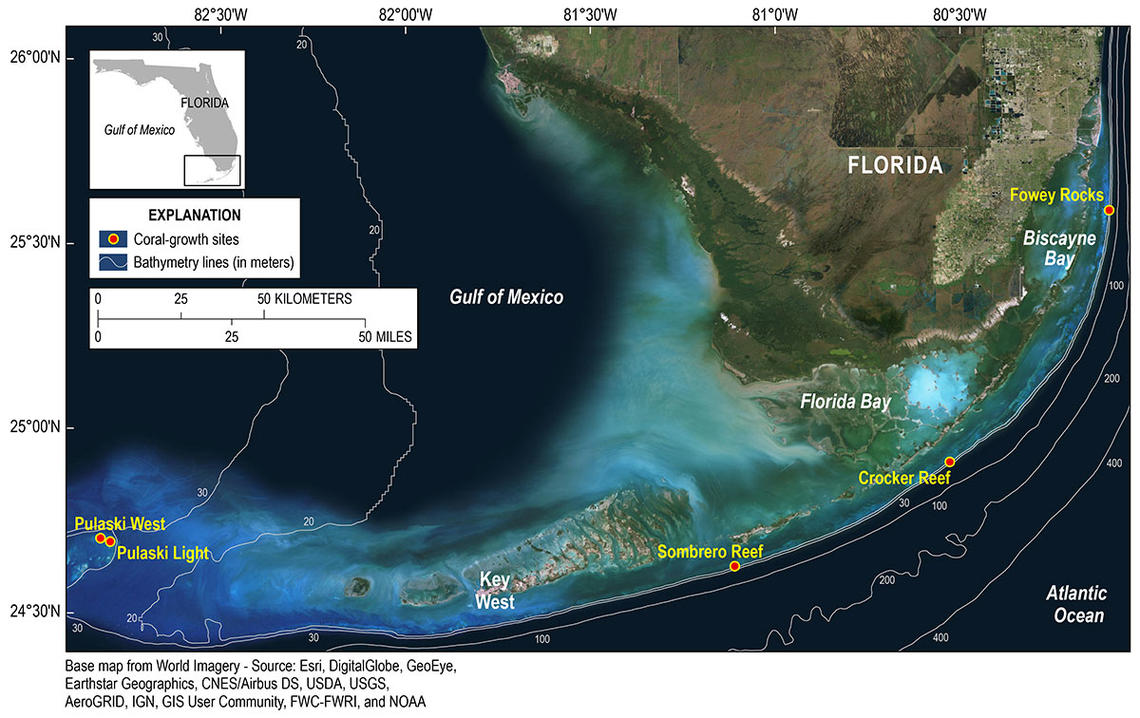 “If we can introduce enough genetic diversity to places like the Dry Tortugas that provide excellent habitat for this species to thrive, the corals will reproduce and provide offspring that have a better chance of responding to stress, seeding future populations that are better adapted to the changing environment and making a stronger, more resilient population,” said Kuffner.

USGS scientists have worked with the National Park Service and NOAA to study this coral reef system since the 1960s and credit both for making the ongoing research possible.

“Our partnership with the USGS and their research directly informs our coral conservation efforts at Dry Tortugas and Biscayne National Parks,” said Pedro Ramos, superintendent of Everglades and Dry Tortugas National Parks. “The results of this study will help to identify locations for replanting nursery-grown corals and assist in the restoration of a more genetically robust, reproductive population.”