This is the comical moment a mischievous Big Pine Key Deer attempts to steal a woman’s salad as she eats outside at a picnic table. Madeline May, 25, had been enjoying a wholesome tuna salad when she encountered the hungry buck trying to make a play for her meal in Big Pine Key, Florida.

Footage shows the sneaky woodland creature slowly approach Ms May, who is originally from Indianapolis, Indiana, before trying to eat the food directly from her styrofoam box.

Madeline May, 25, eats her salad in Big Pine Key, Florida, when the wild buck tries to eat her meal 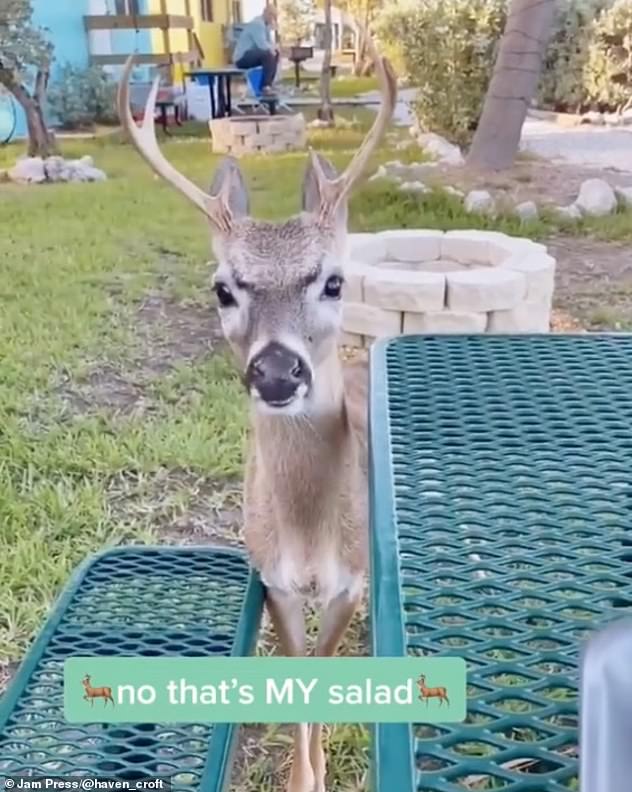 During the clip, which has now gathered more than 330,000 likes on TikTok, Ms May, sits at the picnic table and says: ‘I’m sitting outside enjoying my salad and I’ve been spotted.’

As the brazen [ Key ] Deer approaches Ms May she adds: ‘What are you doing? No that’s my salad.’

The animal attempts to eat a piece of lettuce directly from the styrofoam box in front of Ms May before edging closer to the young woman’s face and sniffing her food.

Ms May said: ‘I was sitting on an outdoor picnic table in Big Pine Key when I saw a creature out of the corner of my eye.

‘He had spotted my salad and was closing in fast and began calculating his moves and coming at me from different angles.’

While domesticated deer are common in the area people are urged to refrain from feeding the animals. Ms May continued: ‘It’s not hard to come across them but it’s still alarming to feel someone watching you – especially when that someone has a rack of points on their head.

Related Post  You Can Help Key Deer - Leave Them Alone

‘But my initial surprise quickly turned to eye-rolling because those moochers will go after food as bad as any house pet. ‘It’s certainly cute but also a bit of a burden as part of you really wants to give it a snack, but not only does it create further annoying habits, it is illegal in the Keys.’ 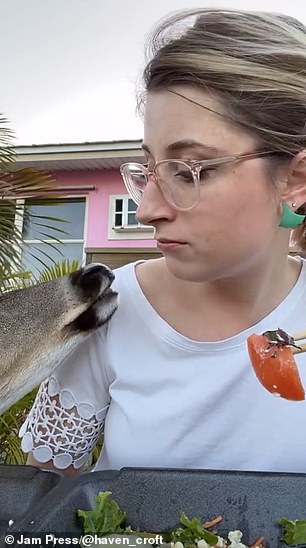 The wild [ Key Deer ] buck draws closer to Ms May’s face and tries to eat her salad as she sits outside. Ms May said she opted not to give the animal any of her food in the end as ‘their salad is everywhere’

‘I’m glad that I had such a positive video go viral. ‘In today’s world, where everyone has to argue in the comments section, almost 100 per cent of the interaction on this video was positive. ‘It’s really cool to see a video bring people together instead of dividing them.’

TikTok users have since shared their amusement with the comical clip, with some calling the wild animal ‘stinking cute’. One user wrote: ‘Give him a piece of lettuce.’ While another added: ‘I can’t with this. This is pure awesome.’ Elsewhere another said: ‘This video will live rent free in my head for all of eternity’ And one person wrote: ‘Awe (sic) how stinking cute!!!’