The number of Key deer deaths due to New World screwworm infestation has remained stable at 132 for more than a week; however, U.S. Fish and Wildlife Service (USFWS) officials are remaining diligent with protection measures to save this endangered species. The screwworm outbreak has increased the normal mortality rate within the small population of this subspecies of white-tailed deer only found in the Florida Keys. As a result, USFWS has been working to determine population estimates to provide guidance for future operations to prevent screwworm infestation in Key deer and prepare for contingencies if the population declines to critical levels. 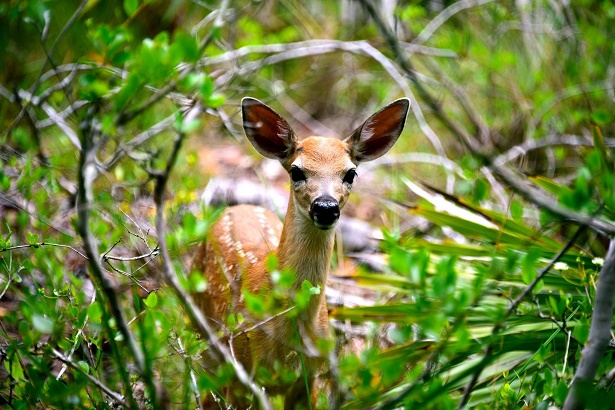 Population estimates prior to the screwworm infestation ranged from 800-1,000 Key deer. In response to the screwworm outbreak, USFWS contracted help from Texas A&M to conduct population surveys to estimate the current number of Key deer, providing a snapshot of the population numbers. The results from those surveys as well as previous surveys provided by the University of Central Florida, and a USFWS survey conducted during the incident have been reviewed by USFWS officials.

USFWS biologists took advantage of the efforts of our numerous volunteers that were dosing the deer with oral medication and marking each treated deer with non-toxic paint. Biologists re-sighting these marked deer were able to conduct counts over time, producing an estimate for Key deer populations on Big Pine and No Name Key. The efforts of so many dedicated volunteers providing oral medication has not only helped treat these deer but has contributed to the greater body of scientific evidence used to make key operational decisions.

Each study provides a snapshot of the current population, continuous surveys will be conducted to adapt as the screwworm incident continues to evolve. “A population estimate is just that – it is an estimate and may increase or decrease with regular fluidity. One factor affecting that number and how often it may change is the level of monitoring” says Drew Becker, USFWS Biologist. As the incident progresses, these estimates will be used to establish trigger points for decisions such as when to place deer in the enclosures set aside for providing a sanctuary for Key deer as a last resort to save the species.

Other plans for saving the species include preserving genetic material from deceased Key deer. Reproductive organs have been collected from deer that have died due to roadkills. There are currently more deer dying from vehicle collisions rather than screwworm infestation. The public is urged to take precautions in Key deer territory by reducing speed, not texting or using the phone while driving, and remaining alert.