New artificial reefs may yet find a place in Florida Keys National Marine Sanctuary waters, says the chairman of a new sanctuary working group. “I think there is a real appetite out there for properly done artificial reefs,” said Joe Weatherby, a dive captain who spearheaded the sinking of the 524-foot USS Vandenberg former military ship about seven miles off Key West in April 2009.

It was the last artificial reef intentionally scuttled in the Keys.

The Keys Sanctuary’s Advisory Council agreed at a Feb. 17 meeting in Islamorada to create a new Artificial Habitat Working Group to focus on “opportunities, needs and challenges” in placing manmade underwater structures in protected waters. Weatherby, who represents tourism as a council alternate, was asked to lead the working group. “I may be a one-trick pony,” Weatherby said Tuesday, “but artificial reefs are my trick.” Goals and membership of the working group are expected to be further defined at the Advisory Council’s April meeting.

The council spent most of its Feb. 17 session reviewing concerns and possible benefits of having artificial habitats in the 2,900-square-mile sanctuary, created to safeguard the natural ecosystem. “A lot of the talk was very focused on ships, but the discussion needs to be bigger than whether we do another ship” as an artificial reef, council alternate George Garrett said Tuesday. 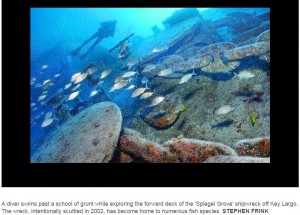 In his former role as Monroe County’s director of Marine Resources, Garrett signed a permit for Monroe County to sink the 510-foot Spiegel Grove military ship in 2002; it has become a renowned Key Largo diving destination. Garrett also signed a permit to sink the 201-foot Adolphus Busch freighter off the Lower Keys in 1998. “People bring all kinds of ideas — reef balls, statuary, art projects,” Garrett said. “They all technically would be considered artificial reefs.” Weatherby said he was “pleasantly surprised” that no strident opposition to new projects surfaced at the Feb. 17 session.

Advocates for artificial reefs worry that a new update to the sanctuary’s management plan could greatly hinder or ban new projects. But biologists have expressed concern that manmade habitats may adversely affect the underwater ecosystem. Writing the management plan remains a work in progress for the rest of 2015. The new Artificial Habitat Working Group “should look a lot like our community” Weatherby said. “No one group should dominate it.”

Garrett said reviews of new proposals for reef projects would ask “more deliberate questions, and require a lot more in terms on monitoring and follow-up.” Weatherby said he believes manmade reefs have the potential to provide habitat for fish and corals in places where nature cannot regrow the natural corals. “I’ve been in the frontline trenches of protecting the coral reef for 30 years,” Weatherby said. “But the corals grew when there were no people here. Now, maybe the best place to grow coral is something like the Vandenberg.”