The Grimal Grove horticultural property at 258 Cunningham Lane was the brainchild of the late Adolf Grimal, an avid tropical fruit tree collector. During his time, Grimal turned the roughly 2-acre site into his own garden oasis. Over time, though, after his passing, the property eventually succumbed to wild overgrowth and hefty code violation fines. Patrick Garvey, founder of the non-profit Growing Hope Initiative, however, came to the rescue. He purchased the Grimal Grove site in late 2013, after successfully lobbying Monroe County for reduced code violation fines. With the acquisition of that land came lots of changes, mainly in the form of efforts to restore the property to its former glory as a botanical garden. 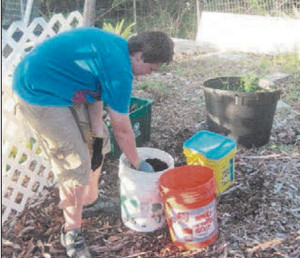 One of the big contributors to that effort has been middle school students at Big Pine Academy. With the help of teacher Jennifer Sullivan, who has taught language arts and social studies at the education facility for the past five years, they jumpstarted an ongoing program a couple of years ago that includes weekly visits to Grimal Grove to perform designated restoration tasks. “We don’t have a lot of [outside] activities for students here [on Big Pine],” Sullivan said. “So, most of them get really excited about going.” Sullivan and Grimal Grove’s owner first met when Garvey was surveying the property before purchasing it. The two exchanged contact information and kept in touch. Garvey eventually bought the site. “And then I found out she had a real interest in it,” Garvey said. After an initial field trip by the Big Pine Academy middle school students in early 2014, the program blossomed. Sullivan said she has been accompanying roughly 20 students to Grimal Grove each Friday afternoon since that visit — the site is within walking distance of the school. They then split into small groups and work on a variety of landscaping tasks such as weed pulling, mulch laying, fruit and vegetable planting, and recycling and upcycling, among other things. Sullivan said she has regular meetings with Garvey on what tasks need to be completed each week. “It’s a pretty neat thing we are doing,”

Big Pine Academy Executive Director Cathy Hoffman said. The students also help run a community composting site on the property, in which residents can drop off their yard and food waste and in exchange will receive the soil from it a few days later free-of-charge. Grimal Grove, according to Garvey, has roughly 80 different plant species growing on its grounds. It is also home to an array of rare, as well as more common, fruits and vegetables that the students and other adult volunteers plant and maintain, including mangos, strawberries, tomatoes and lettuce. Sullivan said they are also working on bringing in pineapples soon. Aside from getting the students outside of the classroom environment, Sullivan and Garvey said it benefits the youngsters on many other levels. “It’s really important for the students to know where their food comes from,” Sullivan said. “And this has caused many of them to now have personal gardens at home.” Garvey echoed Sullivan’s thoughts. “It’s a great resource. It connects youth to agriculture and shows them where their food comes from,” he said. “And it also teaches you the importance of having a little pride in your community.” Garvey also pointed out that the effort by Big Pine Academy will pave the way for other education facilities to participate. “I had always wanted to incorporate schools into this Grimal Grove effort,” Garvey said. “So they [Big Pine Academy] were a catalyst for our future programs.” For more information on Grimal Grove, visit growinghopeinitiative.org.