You may remember the post several months ago about this property being for sale. Rare Chance 40 Acre Parmelee Estate in Islamorada – $19M 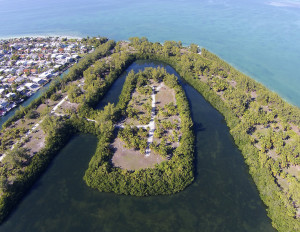 The roughly 40-acre Parmelee Key property, in the midst of a pending sale that hinges on its subsequent redevelopment into a high-end resort community, is awaiting the state’s OK of land-use and zoning changes recently approved by the village.

If given the OK from the Department of Economic Opportunity, and then again by the Village Council, the future owner and developer of the site would be allowed to use the town’s transfer of development rights program as a means to build more units on the land, which has been on the market over a year with an asking price of $19 million.

Some neighbors of the Lower Matecumbe Key property worry what all the changes might bring.

Under the village code, TDRs cannot be used on the property given its current zoning. That zoning only allows for one resort unit to be built for every 4 acres at that site. But if the change is approved, the developer could build one unit for every 2 acres, and then the TDRs would come into play.

Victor Ballestas, of Miami-based Integra Investments, the site developer, made it clear that redevelopment is already allowed on the property. He said the only issue lies with the number of units allowed, which was the reason for the requested land-use and zoning amendments.

The proposed site-restricted plan submitted to the village by Ballestas’ company includes the building of 10 homes, 10 accompanying caretaker cottages, limited to 1,500 square feet, and 10 accessory guesthouses, limited to 500 square feet. Aside from that, plans show the property with a community beach and pier, among other amenities.

“We are looking to turn this property into a world-class community while keeping its old Keys charm,” Ballestas said. The zoning change could also possibly allow for more structures to be built on the property if it were sold to another developer in the future with grander ideas. Redevelopment of that area has some residents on Sapodilla Drive, which runs adjacent to the property, a bit concerned.

Thorndike Williams, a homeowner there for the past year, pointed out that he is fine with the proposed plan. His worries lie with what the changes might allow. “The problem is not the proposed plan,” Williams said. “My concern is that it changes down the road if they decide to sell the property to somebody else.”

Village Director of Planning Cheryl Cioffari pointed out that that future development is a possibility, but that any proposed changes outside of the site-restricted plan would still have to go through village and state approvals. And she said it is unlikely the state would allow a higher-density development.

Other residents are worried about the bald eagles they say have called that tree-dense property home for many years. However, according to the developer’s proposed plans, a protection zone at one end of the property, to be left untouched by redevelopment, will be in place for the birds.

The council approved the proposed changes on first reading at a previous meeting, with some of the board giving praise to the plans and the developer’s past work in other Islamorada endeavors. The proposed changes will go before the council for a second and final reading after the state looks them over and returns its verdict.

The currently two-parcel waterfront property, known as the Parmelee Estate, is located on Lower Matecumbe Key near mile marker 74.8, bayside. It is currently owned by the Parmelee Family Trust.

According to Ballestas, an agreement of sale is already set in place with Integra Investments. However, the finalization of that paperwork is contingent upon approval of the proposed changes.