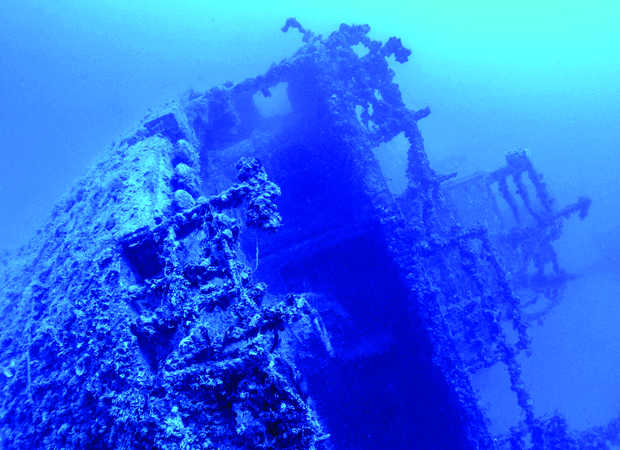 “Houston, Tranquility Base here. The Eagle has landed!” So announced American Astronaut Neil Armstrong on July 20, 1969, when he and fellow Astronaut Buzz Aldrin were the first humans to land on the moon. Six hours later, Armstrong stepped off the ladder of the lunar module saying his historically famous words, “That’s one small step for man . . . one giant leap for mankind.”

Flash forward to twelve noon on December 19, 1985. A freighter named the Eagle, which had been used to transport scrap paper from Miami to South America, was relegated to the deep near Islamorada by the Miami-Dade County Bomb Squad. It took the ship, known now as the wreck of the Eagle, 90 seconds to reach the bottom where she currently lies on her starboard (right) side split into two pieces in approximately 110 feet of water. So what do the Apollo 11 Lunar Module (LM) “Eagle” and a purposely scuttled ship in the Florida Keys have in common? It turns out that neither vessel landed at the location originally planned. In the case of the Eagle Lunar Module, the auto targeting was taking it into a football-field-sized crater, with a large number of big boulders and rocks for about one or two crater diameters around it, and it required flying manually over the rock field to find a reasonably good landing area.

If the stories of the folks who are intimately familiar with the sinking of the Eagle are accurate, there was good old fashion skullduggery to prevent the Eagle from ending up in about 150 feet  of water , which is beyond the limit of recreational scuba diving. This great legend was told to me at a local “watering hole” and affirmed by an eye witness during a “fact check” telephone conversation. Having just binge watched the Netflix series “Blood Line,” and hearing stories during the last four years regaling the colorful  exploits of early residents of the Keys,  I am inclined to believe the  legend recounted by some long time “Conchs” (nickname for folks who are from the Keys or lived there a long time) about the sinking of the Eagle.

The Raila Dan (269 feet  long, 40-feet wide and 65 feet deep) was the  Eagle’s first name after she was built as a hull freighter in Werf-Gorinchem, Holland in 1962. She went through several different owners and seven name changes during her troubled life.In 1985, while on route from Miami to Venezuela, she experienced her second fire (she had an earlier major fire in 1977) damaging the vessel beyond repair. This time the Eagle, named the Aaron K at the time, ended up a glutted derelict at a shipping terminal on the Miami River.

It turns out that Curtis Kruer, then president of the Florida Keys Artificial Reef Association, and dive shop owners were searching for a suitable ship to serve as the Upper Keys first major artificial reef. The Aaron K. came to their attention and the purchase of the ship was arraigned. Joe Teitelbaum, owner of the North River Terminals shipping company and the Eagle Tire Company, donated $20,000. An enterprising dive store employee (with the help of local divers, dive shops, the Monroe County Tourist Development Council, the Artificial Reef Committee and local businesses ) raised another $10,000 to defray the expense of purchasing and cleaning the vessel.

After being cleaned and rendered safe for divers, the Aaron K. was christened the Eagle Tire Co., in honor of her previous owner, and was ready for the deep. The official story of the sinking, or at least the version found during a search of the Web, goes like this: The original location to scuttle the Eagle, about three miles northeast of the light at Alligator Reef, was selected by the Army Corps of Engineers to ensure the ship would settle onto the sand and not the reef.  Prior to being sunk, the Eagle was moored to a sunken barge named the Alexander.

She broke free. Rather than return the Eagle to the originally selected position, it was decided to drop the port (left side) anchor and sink her where she was floating. With the help of the Miami-Dade County Bomb Squad and $873 worth of explosives, the Eagle was sent to the deep. The legend tells a different story. It seems that a local dive shop owner knew the location originally planned to sink the Eagle would place the wreck in water too deep for most recreational scuba divers. This wouldn’t be good for business.

It was time for some good old fashion Conch initiative.

The evening of the day before the Eagle was to arrive from Miami, a group of divers was dispatched to move the mooring markers used to identify the planned scuttling location to a place closer to shore, and still over sand, where the water was shallower. Next day, the ship was towed to the newly marked location. Nobody seemed the wiser.

A local diver made three calls to the Coast Guard station advising that the ship was about to be sunk. Finally, after being told that the big explosion may cause some concern (if not for old time Conchs but maybe for those on a passing ship), the Coast Guard showed up and a radio advisory went out on Coast Guard hailing channel 16. Then, the Miami-Dade County Bomb Squad had a great time sending the Eagle to the deep. Big boom, gurgling sounds, the Eagle went to its final resting place, now accessible to experienced and advanced level scuba enthusiasts.

No matter what version you believe about the sinking of the ship, the Eagle is a great wreck dive.

It has several interesting features including two large mast assemblies and propeller. The bridge area provides a nice swim through. Railings, ladders, and cable winches are still visible. There is extensive coral grow and sponges on the wreck and an abundance of sea life including tarpon, schools of permit, parrot fish, goliath grouper, green morays, snook, triggerfish, spotted eagle rays and stingrays. Dive instructors consider the Eagle an excellent location for teaching deep, advanced wreck and navigation diving.

The Eagle, located at GPS coordinates 24 52.180 by 80 34.210, provides divers an exhilarating and rewarding diving experience.  Who knows, you might see the ghost of an old “Conch” dive store owner grinning at you from one of the ship’s hatches.

For more on the wreck of the Eagle see:

Source: No matter how it got to the bottom, The Eagle is a great dive | Diving | KeysNet