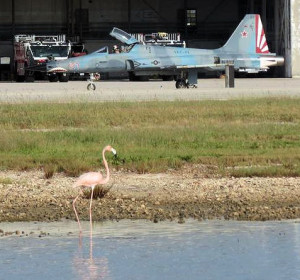 A century ago, visitors to South Florida were often met with what is now a rare sight — thousands of American Flamingos flocking in the wetlands that once dominated the landscape.

They were less common in the Florida Keys as the island chain didn’t offer as much prime real estate that the birds favor. Still, it was not unusual to see the pink fowl as they migrated south on their way to the central and south Americas as well as the Caribbean in decades past.

It is even more rare to spot the birds today as even less habitat is available in the Keys.

So, it came as a bit of a shock that the birds were recently spotted in what seemed at first to be a rather unlikely place — just off the runway at Naval Air Station Key West’s Boca Chica Field where fighter jets come and go at a heavy pace.

The Navy isn’t sure how many of the birds are relaxing in the wide open expanse of the airfield. One seems to be hanging around in a body of water near the hangar where the Naval firetrucks are parked, but two or three more were also spotted, though they may have been passing through, said NAS Key West spokeswoman Trice Denny.

“In the four years I’ve been here, I’ve never seen one until now,” said U.S. Department of Agriculture biologist Rosamaria Gonzales, who works to clear the runways daily of birds and other wildlife prior to the day’s sorties. Gonzales uses small non-lethal explosives to scare off birds that could be struck by aircraft.

When it comes to spotting and protecting wildlife (as well as aircraft) at Boca Chica Field, Gonzales is on the frontlines.

“Based on responses to the picture we put on Facebook, other people are saying they have seen them nearby,” Gonzales said from behind the wheel of her truck on Wednesday. “But we used to have all the bushes, trees and mangroves and now that they’re gone, we might be seeing wildlife that’s been here, we just never noticed them.”

The Navy’s reasoning for the project was primarily two-fold: To come in compliance with federal mandates that state air operations staff have an unobstructed view of the air field and to restore the airfield to its true environmental lineage.

The Navy removed mangroves and buttonwood trees and replaced them with marsh grasses and wetland grasses that are the preferred habitat for species like the protected Lower Keys marsh rabbit. Barham called the project upon its completion last year as “probably the biggest wetland restoration project in the Keys,” in the 22 years he’s been working in Monroe County.”

In other words, maybe it’s not so surprising that the rare American Flamingo has taken up shop at the airfield. It is 4,700 acres of mostly undeveloped land that has lured all kinds of wildlife over the years. Much of that wildlife contains state and federally protected species that includes herons, egrets, buzzards, raptors, eagles — including bald eagles — hawks, swallows, kestrels, falcons and sometimes an owl or two. That doesn’t include the marsh rabbit, which is also protected.

What specific birds take flight around the aircraft typically depends on the time of year, Gonzales said.

Ibis birds, herons and egrets of many kinds often turn parts of the airfield into a rookery, which means Gonzales is a busy woman most days of the year, regardless of the season. Often, Gonzales is shooing away Least Terns, a small, mostly white bird that has taken to nesting in the gravel flats among the runway dividers.

“The last verified sighting of an American Flamingo was on Rockland Key in the spring of 2006,” said Florida Keys National Wildlife Refuge biologist Kate Guerena. “Their numbers are historically very low in the Keys. This is peak migration right now and it is unlikely that this bird (or other flamingos at the air field) are calling Boca Chica home. It’s likely just moving through. This is probably their last stop before their long trek over open ocean.”

Though the flamingo sightings were an interesting change of pace for wildlife lovers at the airfield, the Navy has to remove them for the safety of the birds as well as pilots.

Birds may not seem like a threat to pilots or aircraft, but hitting one at jet fighter speeds can cause significant damage to aircraft as well as the bird, said Airfield Manager David Vermillion

The Navy is partnering with Miami-Dade Zoological Park and Gardens officials to net the birds and set them free in safer areas on the mainland, Gonzales said.

“This is the perfect example of the fine line we have to walk in protecting the environment as well as having a fully operational airfield,” Denny said as a flamingo waded nearby. “When we see something like this, it really is pretty amazing.”

For Barham, the flamingo sighting provided confirmation as to the need and validity of the wetlands restoration project.

“The whole intent of the project was to enhance safety while conserving the wetlands by removing some mangroves and restoring the saltwater marsh wetlands,” Barham said. “Prior to the restoration there might have been a variety of wildlife present here, but we never saw it due to the vegetation obscuring the flight lines or maybe the flamingos just prefer the wide open space we have now.”

Barham agreed that it was probably best for both the birds and the Navy to relocate the flamingos, but he added that “as long as the wildlife doesn’t impact flight operations we’re perfectly happy with them being here.”

Guerena urged residents to report flamingo sightings to refuge officials at 305-872-2239 so scientists can gather better data on their numbers in the Keys. A quick cellphone picture will also greatly help in identifying the birds, Guerena said.

Source: A sight to behold | KeysNews.com