The Key West Tropical Forest & Botanical Garden is a Stock Island nursery that is one of the Lower Keys’ best-kept secrets, a sanctuary for plants and people just off College Road. And at the heart of the 7.5-acre garden is a native plant nursery where it all begins. 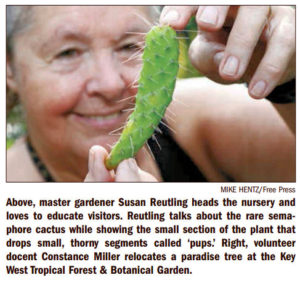 The nursery was born of necessity, to cultivate rare and endangered plants and to fill in the blanks at the garden that meanders among 1,500 plant species, two natural freshwater ponds, a turtle habitat and butterfly garden. The freshwater ponds are a major migratory stopping point for neo-tropical birds from places as far as South America, as well as being home to many rare birds in the Florida Keys.

“The nursery has been in place for quite some time,” said master gardener and volunteer nursery coordinator Susan Reutling. “It started with the idea that we could grow whatever plants we needed for the garden, but it was only a few years ago that we started opening it up to the public and spreading the wealth, so to speak. “We’re growing some of the species because we’re losing them,” Reutling said, examining the bright green flesh and sharp barbs of the endangered semaphore cactus. The sprawling, prickly plant can reach heights of 15 feet and drops small, thorny segments, called “pups,” that take root when planted. The semaphore cactus only grows in the Keys, an area not particularly known for its cactus collection, and it’s endangered in its home region as well.

Volunteers at the Key West Tropical Forest & Botanical Garden are doing great work with the semaphore, Reutling said, estimating that 35 percent of the nursery’s inventory is an example of a threatened or endangered species. “But we also wanted to be able to provide residents with the opportunity to buy native plants and the education they need to ensure its success,” she said. And so began the third Saturday plant sales at the nursery within the forest. From 10 a.m. to noon every third Saturday, a cadre of volunteers walks among the rows of seedlings, saplings, and 1- and 3-gallon pots, helping visitors select the best options for their yard and environment. Most plants are either $8 or $15. “And we have more than 150 different species, including many that aren’t often found at commercial nurseries because, to be honest, they’re just not that profitable, or they take too long to grow,” Reutling said, emphasizing that the Key West Tropical Forest & Botanical Garden is a non-profit organization that’s also classified as a museum. “We grow things we need that are threatened and endangered, but they’re all native to the Keys and the Caribbean basin,” Reutling said. “It’s organic — it grows itself.”

Among the plants for sale are Florida Keys blackbead, blue porterweed, shinyleafed wild coffee and white indigo berry bushes. “And the money we get from the monthly sales is put back into the nursery so we can continue both our cultivation and education efforts,” Reutling said, adding that this month’s sale takes place Saturday, May 21. For more information, visit kwbgs.org.