Key deer were almost hunted to extinction. By 1950, as few as 25-50 of the animals were left. But the creation of the National Key Deer Refuge on Big Pine Key and protection under the Endangered Species Act have led to a comeback. The most recent population study estimates the herd at 900 to 1,000.

“They are truly one of the success stories of conservation,” said Adam Emerick, a refuge biologist who gave an update on the Key deer to the Monroe County Commission this week. 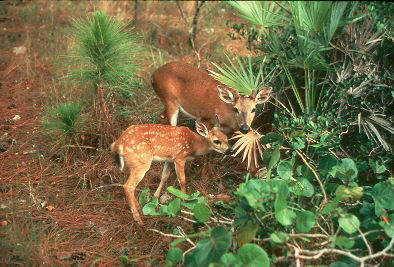 Still, the deer face threats — like fragmentation of habitat. The refuge is on Big Pine Key, which is also a community of 5,000 people. And the island is crossed by the Overseas Highway, which carries millions of cars a year across the island.

The deer are irresistible to visitors and some residents, who feed them, pet them and take photographs with them to post on social media.

“The interaction with the deer is probably our No. 1 issue,” Emerick said. When deer associate people with food, they tend to hang out in populated areas — which means roads. Getting hit by cars is the most common cause of mortality for the deer.

Deer also get entangled in backyard hammocks and batting cages, and have been attacked by dogs. Emerick said one deer was killed by two Chihuahuas.

“You can’t make up the type of stuff we have to respond to,” Emerick said. “Deer get in all sorts of trouble.”

The U.S. Fish & Wildlife Service, which manages the refuge and is responsible for protecting endangered species, has recently started working with the state Fish and Wildlife Conservation Commission and the Monroe County Sheriff’s Office so those agencies can respond to calls about the deer.