Skip to content
Wondering how you can help in the fight against the decline of corals? With a new smartphone app called OkCoral, the Coral Restoration Foundation is hoping it can answer that question by turning underwater photographers into a citizen scientists. Florida Reefs

The idea behind the app is getting recreational divers to help monitor the health of coral clusters that the foundation has outplanted in its program to return the severely impacted Florida Reef Tract to its former glory. Reef-building staghorn and elkhorn corals have almost completely disappeared from the Florida Reef Tract since the 1970s, and the Coral Restoration Foundation has been trying to reverse the trend by growing these corals in huge offshore nurseries and then replanting them at selected sites along the reef.

Using the app, divers first learn how to spot the differences between corals, how to distinguish between living and dead corals, and how to identify whether corals have grown, or fused, together. After that, all you need is your camera and housing to take pictures of the outplanted coral clusters that you come across on your dives. Back on dry land, you transfer the images to your phone, and then submit the pictures you’ve taken along with relevant information about the site.

Find out more about the coral restoration program and the app in the press release below.

OkCoral: Swipe Right for Science!
If you are a diver or snorkeler, it has never been easier for you to help save coral reefs from extinction: A new app from the Coral Restoration Foundation, OkCoral, is bringing Citizen Science into the 21st Century, and not a moment too soon.

The world’s leading coral restoration organization, the Coral Restoration Foundation, has developed a revolutionary new app that lets all ocean lovers collect important data that will support the mission to restore reefs around the world to a healthy state.

At the current rate we are losing them, all shallow water coral reef systems could be functionally extinct in the next 80 years. Yet coral reefs are essential for life on Earth – they support 25 percent of all marine life, protect coastlines from storm surges, and underpin economies around the world. The Coral Restoration Foundation, based in the Florida Keys, was founded in response to the crisis facing our planet’s coral reefs.

The Florida Keys lie along the Florida Reef Tract – the third largest barrier reef in the world and the only barrier coral reef in the continental United States. Since the 1970s, the Florida Reef Tract has lost more than 95 percent of its once-dominant reef building corals, staghorn (Acropora cervicornis) and elkhorn (Acropora palmata). These corals are now listed as “Critically Endangered” on IUCN’s Red List of Endangered Species, just one step away from “Extinct in the Wild”.

Plant a coral, restore a reef

In response, the Coral Restoration Foundation developed a simple, scalable method for actively restoring coral reefs, starting with the Florida Reef Tract: They grow huge quantities of genetically diverse staghorn and elkhorn corals in massive offshore nurseries of “Coral Trees™”, and then replant these corals back onto carefully selected reefs sites. To date, the Coral Restoration Foundation has planted more than 66,000 corals back onto the Florida Reef Tract. Many of these corals are now spawning – evidence that the reefs’ natural process of recovery is kicking in.

Yet the mission to restore coral reefs has only just begun and the team at the Coral Restoration Foundation is constantly working to improve its techniques.

“We want to ensure that our methods are as successful as possible – that we are focusing on planting the right coral genotypes, in abundance, on reef sites where they have the best chance of survival. We can only do this by continuously monitoring the health of the corals we have already outplanted,” says Coral Restoration Foundation’s Restoration Program Manager, Jessica Levy.

But this is a mammoth task. In order to continuously monitor the thousands of coral clusters that they have already outplanted it would take a veritable “army” of researchers, and that is where you come in.

OkCoral quickly brings budding Citizen Scientists up to speed using its intuitive swipe-based game. Once you’ve passed its three easy levels, you are ready to head out and start gathering data. The app’s intuitive interface makes it easy to understand how to send the Coral Restoration Foundation the straightforward information they need: OkCoral guides you through the whole process, step-by-step.

The app was funded in part by a grant from the SeaWorld & Busch Gardens Conservation Fund, a 501 (c) (3) non-profit private foundation that was created to provide resources for conservation programs worldwide.

“The loss of coral reef habitats is one the biggest threats facing our oceans today, and The Coral Restoration Foundation has long been a leader in working to restore impacted habitats,” said Executive Director of the SeaWorld & Busch Gardens Conservation Fund, Bill Street. “Assessing impacted coral reefs to determine the most effective restoration strategy is a massive undertaking and takes a great deal of time. OKCoral is an innovative approach to enlist the help of citizen scientists in a meaningful way that will help prioritize crucial restoration areas, as well as engage those that recreationally benefit from the reefs in their survival and protection. The SeaWorld & Busch Gardens Conservation Fund is proud to support the creation of OKCoral and provide an opportunity for anyone to participate in the protection of these vital habitats.” 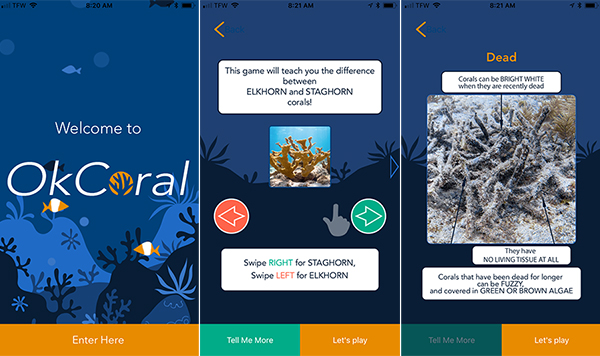 With an underwater housing for your smartphone, you can even collect and save all the data and images while you’re still on the dive! Thanks to the generous donation of three underwater iPhone housings from Kraken Sports, the Coral Restoration Foundation team is able to provide underwater training in the use of the app during their Dive Programs.

“We admire the work CRF is doing for the reefs in the Florida Keys. We firmly believe they are making a difference, one coral transplant at a time,” said Doug Taleski, Founder of Kraken Sports, “As a result, we are partnering with the project to give smartphone users the ability to chip in and help monitor CRF’s amazing efforts by easily uploading photos of transplanted corals taken on their smartphone using our Smart Housing. Kraken Sports continues to be a proud supporter of CRF and their important mission. We’re honored to be a part of this initiative.”

OkCoral is currently only available for iOS devices. This is just the beginning, though, and an Android version should be available soon.

You can be part of the mission! Visit coralrestoration.org/citizen-scientist to learn more.

Coral Restoration Foundation (CRF) is a non-profit marine conservation organization dedicated to restoring reefs to a healthy state, in Florida and globally. Through large-scale cultivation, outplanting and monitoring of genetically diverse corals, CRF works to support the reefs’ natural recovery processes. CRF engages and empowers others in the mission with dive programs, educational activities, scientific collaborations, and outreach. coralrestoration.org