She’s been spending the winter mostly in the Lower Keys, but by summer, she’ll most likely be back in Cape Cod like any snowbird, except she’s a 12-foot, 1,668-pound female great white shark named Miss Costa.

This has been her second season visiting the Keys, according to shark research organization Ocearch. 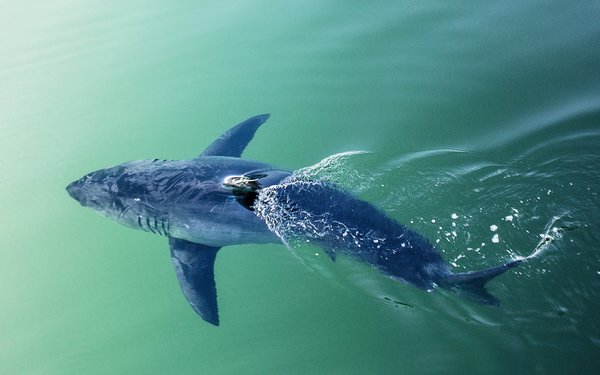 In 2016, Miss Costa showed up in November and stayed for a while. In 2017, she surfaced on Dec. 10 in Key Largo. She then hugged the Keys’ coastline and ventured into the Gulf of Mexico, pinging on New Year’s Day in Tampa.

A ping is caused when the shark’s tagged dorsal fin breaks the water surface to transmit a signal to a satellite. Last week, she was hanging around Big Pine Key and pinged on Monday, Feb. 5.

“She’s doing what we are seeing other not-quite-sexually-mature female sharks do — cruising down from (Cape Cod) and summering there,” said Chris Fischer, Ocearch founding chairman and expedition leader.

His nonprofit organization collects scientific data on marine species such as great white and tiger sharks. Its mission is also committed to conservation outreach and education.

“It means that they Keys are healthy. She, like every other great white, is culling out the weak, dead and dying fish stocks. She’s balancing the system,” Fischer said when asked what brought Miss Costa to the Keys.

She is named after Costa Sunglasses, who has partnered with Ocearch in its tracking projects all over the globe.

Fischer said Miss Costa is doing what other young female sharks do except she’s at the furthest southern range. He considers the Keys to be the bottom of the great white nursery.

Fischer said Miss Costa is close to sexual maturity, which happens around age 20, or when the shark reaches 13 to 15 feet in length. Great whites can only give birth every other year as their gestation period is 18 months. Fischer said they tend to drop their pups off in the Long Island area.

If Miss Costa should should reach maturity this year, she probably won’t visit the Keys next year, Fischer said.

“I’m guessing she returns to Cape Cod this fall, and we’ll see if she mates. If she does, she won’t come this far south again,” he said.

His research has shown that this North Atlantic species tends to go no further south than the Cape Canaveral area and go far offshore from there. Ocearch has tagged and is tracking 30 whites in the Atlantic. They have 150 species around the world.

Another great white shark being tracked by Ocearch pinged last week in the Gulf of Mexico. His name is George, and historically, he’s the first tracked great white to ping close to the Everglades.

Jacksonville University is a research partner of Ocearch. Assistant Professor Bryan Franks said, that ideally, they will have 20 juveniles and 20 adults to study. He’s been studying sharks for about 15 years.

“What interests me about great whites is that they are the apex predator,” he said. “They live in a preferred habitat. It’s a cooler water species. They’re in a family and order of sharks that can warm their bodies temperatures slightly, only be a few degrees.”

Great whites are distinct in shape from other sharks. They have large fusiform, or torpedo-shaped, bodies and a cone shaped mouth. They give live birth to pups, typically six or seven, which are not reared and generally start feeding immediately.

“Recent evidence suggests great whites live longer than what we originally thought, I’d say 70 to 80 years. If these large sharks go, so does the whole system,” he said.

For more information on Ocearch’s research and missions, visit ocearch.org.