If you are familiar with the Florida Keys’ marine world, you’ve probably had an experience with Florida Keys Sharks. When you see a shark, the excitement of your experience is often elevated. Sharks have inspired fear and respect via movies, books and even “Shark Week.” It is important to dispel the myths of vengeful man-eaters and become familiar with some of the local sharks, their common behaviors and their importance to our environment. Sharks are at the top of the food web and go after the older, slower, and sicker populations, thereby keeping the marine ecosystem in a healthy balance.

One of the most widespread sharks in the Keys is the gray nurse shark. It’s one of the few sharks that can lay motionless on the bottom, often under ledges and wrecks. Other sharks must continuously swim to move oxygen over their gills, while nurse sharks can pump water over their gills. Grayish-brown in color, they blend into their environment. Barbels, fleshy appendages similar to a catfish’s, help detect prey. They eat bottom-dwelling fish, shrimp, crabs, lobster, sea urchins and coral. They can grow up to 14 feet but average 6 to 9 feet in length. Although nurse sharks appear lethargic, they can be dangerous if provoked. A good rule to follow, which applies to all marine life, is “look, but don’t touch.”

Another group of sharks that are common to the Keys are the reef sharks. These are the black tip, white tip and gray reef sharks, named for the color tips on their dorsal and caudal fins. Found in shallow waters around the coral reefs, they feed mainly on fish. Reef sharks sometimes hunt in frenzied groups, but are mostly seen cruising the reefs alone. 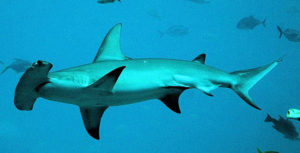 The greater hammerhead shark is found on both sides of the Florida Keys, in the open ocean and in shallow waters. In channels or under bridges, they’ll wait for an easy meal, feeding on fish, rays, sharks, squid and crabs. They can grow to 18 feet, while the bonnethead shark, measuring in at 3 to 4 feet, is the smallest member of the hammerheads.

The bonnethead’s shovel-shaped head is narrower and more rounded than a hammerhead. Bonnetheads feed primarily on crustaceans, but also eat clams, octopuses and small fish. They are quite wary of and usually avoid divers.

The notorious bull shark is considered to be unpredictable and is third on the list of most dangerous sharks. Bull sharks can be 13 feet long and weigh 1,200 pounds, with females being larger than males. They are gray on top and white below. They feature two dorsal fins, one large and another much smaller. They feed on fish, turtles, sharks and occasionally birds but aren’t too picky about their diet and will eat what’s readily available.

You may encounter other, less common, sharks when exploring Keys’ waters. Prepare to be exhilarated and plan your trip to the real Florida at floridastateparks.org. You may gain a “fish tale” that you can spin to your friends for years. Just remember: be aware of your surroundings, act safely and have fun.