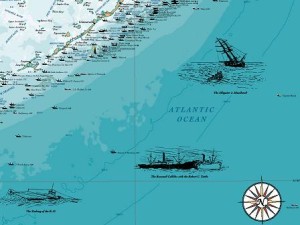 A shipwreck salvor has claimed to have found a wrecked sailing vessel somewhere off the Middle Keys, but as is usual with such cases, specifics about what treasures it may hold and from what year in history it hails remains shrouded in secrecy.

Morgan declined to say what has been recovered thus far from the wreck, but added the water is shallow enough to be searched by scuba divers. Morgan did not know what year the vessel wrecked, he said. Latitude and longitude coordinates included on court records indicate the wreck is somewhere off Duck Key in Florida state waters. “A portion of the wreck is currently protruding the sea floor in such a manner that it presents a hazard to navigation endangering the life and property of vessels navigating over the surface of the site,” court records state.

Legal records state that EPW Salvage, Inc. hopes to retain “the remains of the unidentified and wrecked vessel, her armament, apparel, tackle, furniture and cargo,” except for the state of Florida. Should EPW Salvage make a substantial find, that location could prove to be a legal conundrum for the company. The state of Florida could fight the company for a percentage of the loot. Other government organizations such as the Florida Keys National Marine Sanctuary could argue salvage would disrupt the ecosystem and try to stop salvage operations. But those two points remain speculative. Thus far, no other group or government has challenged EPW Salvage, Inc. on the wreck.

“Since the time of the discovery, the plaintiff has not disturbed the wreck site and shall not do so unless and until it receives license by the state,” according to court records. EPW Salvage, Inc. also stated that it “will diligently seek state of Florida’s consent to salvage the vessel for the purpose of removing the said obstruction to navigation and relics in an archaeologically proper manner and to preserve the same accordingly.”

Meanwhile in a separate, unrelated case, U.S. Senior Judge James Lawrence King granted the rights in October to Kahar, LLC after the company told the court that no one else had come forward to lay claim to a mystery wreck of an unidentified vessel discovered in 2012 in international waters off Key West, according to court records. A relic recovered from the ship indicates that the ship is “an ancient sailing vessel,” according to court documents. Morgan is the attorney in that case as well. He reported no recent news on that wreck. “The salvage continues,” Morgan said.