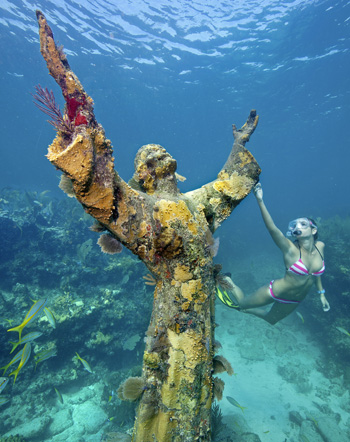 An essay contest is underway to award an underwater wedding to mark the 50th anniversary of the iconic “Christ of the Deep” statue’s installation in the Florida Keys National Marine Sanctuary.

The 9-foot bronze “Christ of the Deep” has become a symbol for Key Largo’s John Pennekamp Coral Reef State Park, America’s first underwater preserve created in 1960, which is part of the sanctuary.

It is a replica of the Italian original, “Il Christo Degli Abissi” or “Christ of the Abyss.” Visitors from around the world come to snorkel, dive or ride glass-bottom boats to view and photograph the iconic statue that rests in less than 25 feet of water about 5 miles off Key Largo.

In honor of the 50th anniversary of the “Christ of the Deep” statue’s placement, Key Largo’s Amoray Dive Resort has organized the contest to win a subsea wedding. The couple who best describes in 100 words or less why they wish to be married at the famous statue will be selected as the winner.

The grand prize is valued at $1,500 and includes four nights at Amoray Dive Resort, valid between Aug. 23-26, 2015; the officiate fee and morning undersea wedding ceremony at the “Christ of the Deep” statue Tuesday, Aug. 25; and a nuptial dinner at Sundowners Restaurant, located bayside along Blackwater Sound at mile marker 104.

Entries must be submitted to &su=%20Essay%20Contest" target="_blank"> by July 31, 2015. Contestants must obtain a Florida state wedding application for a license and must already be certified SCUBA divers.

Created by artist Guido Galletti, the original was placed in the shallow San Fruttuoso Bay near Portofino, Italy, in 1954. Galletti also crafted the mold for a Christ statue that was cast for Egidi Cressi, a well-known diving equipment manufacturer, who donated it to the Underwater Society of America in 1961.

“Christ of the Deep” traveled 6,000 miles from Italy to Chicago, Ill., where it was placed in storage. Although state dive councils in Illinois, Michigan and the Northeast petitioned for the statue, it was decided the clear waters of Pennekamp Park were to be the statue’s final resting place. In late 1963, the statue was transported to Orlando, Fla., placed on display, and later exhibited at St. Petersburg and Palm Beach, Fla., before arriving at Key Largo where it was stored outdoors at Pennekamp park.

Finally, executed with the aid of local dive operators and park officials, a small budget and donations of concrete for the statue’s 20-ton base, the statue was lowered beneath the surface and secured to the seabed Aug. 25, 1965.