Ever wondered about Florida Keys Names and why certain locations are named as they are? You may be on vacation in the Florida Keys, or a resident, and asked that question.

If you’re boating and come across Alligator Reef, don’t think the name means it’s overrun with reptiles. The reef was named after the USS Alligator, a U.S. Naval schooner. This ship, built in 1820, was being used to protect merchant convoys from pirates when it ran into the shallow reef in 1825. After salvaging what they could, the ship was destroyed to prevent further looting. Now only the ballast stones remain. The lighthouse was built in 1873 to aid navigation around the reef. At the time, it was the tallest existing steel structure.

It’s not certain how and when Indian Key got its name. Its harbor was probably used first as an anchoring location for ships to obtain fresh water on Lower Matecumbe Key. As early as 1742, the island was known as “Cayuelo de las Matanzas (Slaughters).” The story told was that French settlers needed laborers in the Louisiana/ Mississippi area. Prisoners from France were loaded aboard ships and brought to America. Survivors from a ship that wrecked near the island were slaughtered by Indians. Though never officially recorded, this event led to the name, Matanzas Key, and later to Indian Key. Indian Key is critical to the history of the Upper Keys, since it was one of the first settlements (1820s through 1840), with houses, a hotel and a bowling alley. It was the county seat for Dade County, serving various transitory functions until its decline in August 1840, following another Indian raid. 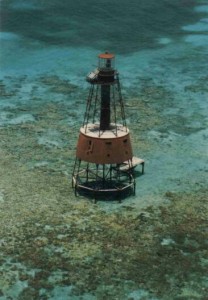 Carysfort Reef is named for the HMS Carysfort, a 118-foot long, 28-gun British frigate, which ran aground on the reef in 1770. It never sank, was refloated and eventually sailed away. Approximately 6 nautical miles east of North Key Largo, the reef is also the site of the oldest recorded North American shipwreck, the HMS Winchester. When this 60-gun battleship was in route from Jamaica to England, the hull was impaled and sank on the jagged coral. Several cannons exhibited at John Pennekamp Coral Reef State Park are from the Winchester. Garden Cove is on North Key Largo, a mile southwest of Carysfort Reef. Before lighthouses, lightships were used to mark the reef. In 1824 the Caesar, a two-masted lightship, was anchored just offshore in Turtle Harbor. Commanded by Capt. John Whalton, the Caesar was the first lightship for Carysfort Reef.

Garden Cove was so named because citrus and other fruits and vegetables were grown there and sold to passing ships. Coming ashore in June 1837 to restock fruits and vegetables for the lightship, Capt. Whalton was killed by Indians. In his honor, the entrance and main road of the former Port Bougainville development, now Dagny Johnson Key Largo Hammock Botanical State Park, is named Captain Whalton Drive. 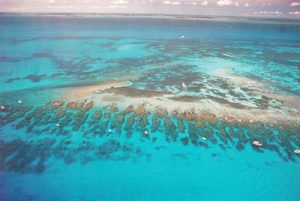 Looe Key, located southwest of Big Pine Key, is a wonderful scuba diving and snorkeling spot. Accounts attribute the name to the HMS Looe, a ship that reportedly sank on the reef. The HMS Looe was a vessel serving Great Britain during the war against Spain. However, it was the HMS Loo, a fifth-class British frigate built circa 1706 and commanded by Capt. Ashby Utting, that sank on the reef in 1744. The Loo was also a warship, carrying between 40 and 44 cannons and was dispatched to Charleston, S.C. The Spanish were still in control of Florida, and the Loo was sent to protect British merchant ships and disrupt Spanish trade between Europe, St. Augustine and Havana. The Loo came upon a suspicious-looking ship flying a French flag, just off Cuban shores. Utting captured the ship and discovered that it was an English merchant vessel, the Billander Betty, which had been taken and was being used by the Spanish. While towing the prized ship back to Charleston, en route past Key West, the crewmen of the HMS Loo saw waves breaking over a shallow reef system. An alarm was sounded and evasive actions taken, but the rudder struck the reef and broke off. The Loo, unable to steer, was pounded by swells and beaten against the coral beds. To make matters worse, the Billander Betty, still in tow, crashed into the Loo, sinking both ships.

Pickles Reef (and the Pickle Barrel Wreck) got its name from submerged pickle barrel-shaped boulders at the site. The barrels were from a U.S Civil War era ship that was running supplies to Fort Jefferson. The ship ran aground and sank on a shallow reef. Concrete and mortar in the submerged barrels hardened, while the wooden barrel outer shells rotted away, leaving solid concrete boulders.

Like Pickles Reef, Molasses Reef allegedly was named for the cargo of a ship wrecked on its site. Some accounts dating from the Civil War period suggest that the wreck was a solitary barge loaded with molasses, while others attest to the reef being the spot of numerous wrecks. However, there is no specific documentation that substantiates these claims. Whatever may be true, the reef was called Molasses and the name has “stuck” ever since. Local charter services, including the snorkel and glass bottom boats that depart from John Pennekamp Coral Reef State Park, refer to Molasses Reef as the “Aquarium.” The mix of sponges, corals and limestone substrate creates a massive and brilliantly designed underwater complex. Molasses Reef is a spur-and-groove formation with complex hard corals, barrel sponges and vases, and a host of soft corals, including brilliantly colored purple sea fans and delicate sea whips.

Stay tuned for future installments of “What’s in A Name?” which will discuss the naming of El Radabob and other sites unique to the Florida Keys.

Florida State Parks include much of the history of the Florida Keys. Plan a trip to learn more about the stories behind the names by visiting floridastateparks.org. Bob Muhly is a park ranger at John Pennekamp Coral Reef State Park.

The Florida Keys are a group of islands, full of history and mystery, tenuously connected by a sinuous highway to the southern coast of Florida. There is something about them which attracts, or at least intrigues, a lot of people. They are especially eclectic as they attract a wide range of visitors including Jimmy Buffet and Ernest Hemingway fans. This is the story primarily of the origin of the names of many of the Keys and their features as well as the origin and development of many of the features themselves offered in the hope that it may help residents and visitors to further enjoy and appreciate ‘The Keys”.