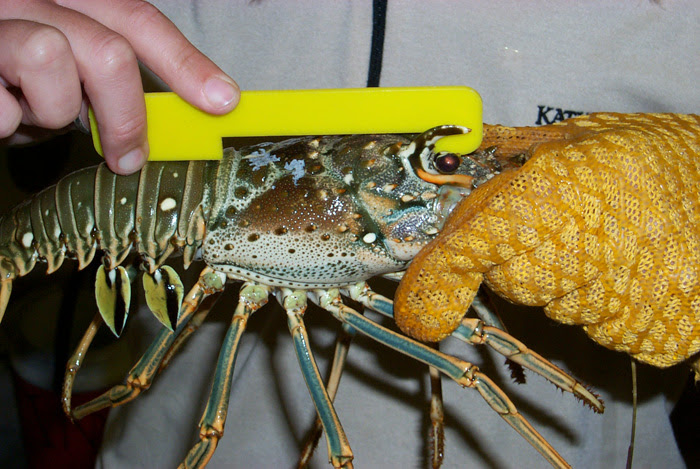 Lobster season is one of the busiest times in the Florida Keys, as thousands of visitors and residents hit the waters in search of one of their favorite delicacies, the Florida spiny lobster. With smart choices, you can lower your impact on sensitive coral reefs and other natural resources that you are here to enjoy. Start by learning lobster regulations for the Florida Keys, as detailed in the Monroe County lobster brochure. It all boils down to being safe on the water and practicing respect — not only for the fishery rules that ensure sustainable harvest but also for fellow boaters and divers and the coral reefs and habitats that lobsters call home.

Keep These Rules and Regulations in Mind:

New Lionfish Removal Opportunity – The Florida Fish and Wildlife Conservation Commission approved a new rule on June 25, 2015 to encourage divers to remove lionfish during the 2015 lobster sport season (a.k.a. mini-season). The rule allows divers to take a single spiny lobster over the bag limit per day for each day that they also harvest 10 or more lionfish during the 2015 spiny lobster sport season only. Lionfish must be harvested the same day and prior to taking the additional lobster. Please consult FWC Spiny Lobster Recreational Regulations before determining eligibility and remember to comply with all sanctuary regulations, including zones where spearfishing is prohibited and permit requirements.

Florida Spiny Lobster Fun Facts – The Florida spiny lobster, Panulirus argus, is also known locally as crawfish, “bugs”, or langosta(Spanish). Lobster bodies have two main segments: its head section, covered by a carapace, and an abdomen, or tail section. Unlike its northern cousin, the American lobster, it lacks large claws. The “spiny” in its name refers to a set of forward curving hard spines that cover its hard outer shell (the exoskeleton). Its colors vary from whitish to dark red-orange, and two large cream colored spots at the top of the second tail segment are an identifying feature of this species. Often, the first feature that you will spot in the water are two long, thick, antennae with spines that emerge below its eyes. Below these are two small sensory antennules.Common in Florida Keys and found from Brazil to North Carolina, the spiny lobster lives in rock, coral reefs, seagrass beds and hardbottom habitats through the tropical and subtropical waters of the Caribbean, Gulf of Mexico, and Atlantic Ocean. It feeds on crabs, shrimp, snails, clams, and other crustaceans and mollusks. Lobsters tend to congregate in crevices to avoid their predators, which include the common octopus, loggerhead turtle, blue crab, nurse shark, Southern stingray, and reef fishes such as grouper, snapper, and triggerfish. 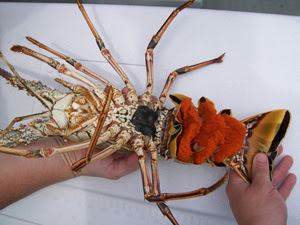 All egg-bearing female lobsters must be released regardless of size. (Photo by FWC/Amy Buck.)

Reproduction and Growth – Lobster reach maturity and start reproducing at three years of age. The females carry the eggs on their abdomen (underside of the tail) where they are fertilized externally. Spawning takes place between March and August in waters that are 73º F or warmer. Fertilized eggs incubate for three weeks, during which their orange color deepens to dark brown. Newly hatched lobsters are small larvae that drift thousands of miles on ocean currents for the first six to nine months. Once settled into a suitable habitat, the larva grows and molts into a juvenile. Although large female lobsters can spawn two to three times a year and produce up to a million eggs, as few as one egg, on average, might survive to adulthood. It then takes about three years for a lobster carapace to reach the legally harvestable size of three inches. Male lobsters typically grow faster than females. Lobsters are capable of living more than 20 years and reaching weights up to 15 pounds.