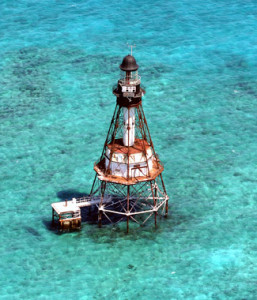 The Fowey Rocks Lighthouse is located offshore in the northeast corner of Biscayne National Park and within sight of the park’s northern islands as well as Cape Florida. The lighthouse was first lit in 1878. It has guided mariners away from dangerous reefs for over 130 years. The structure is showing its age. Years of deferred maintenance have resulted in unsafe conditions and a long list of projects needed in order to restore and stabilize the lighthouse. Its current condition is what led the Florida Trust for Historic Preservation to identify it as one of the most endangered historic properties in the state.In 2012, Biscayne National Park accepted ownership of the lighthouse from the U.S. Coast Guard. The lighthouse structure belongs to the park but the light itself continues to be maintained by the Coast Guard. The original lighthouse lens was replaced with a modern solar powered light visible for approximately 17 miles out to sea.

The park has been working to find the substantial funds necessary to rehabilitate the lighthouse structure. The Florida Keys Reef Lights Foundation and the Florida Lighthouse Association provided funds for initial stabilization efforts, but the structure is in need of much more work. The park hopes to someday restore the lighthouse as a functional residence and to establish a volunteer lighthouse keeper program. The Florida Trust for Historic Preservation promotes the preservation of the architectural, historical and archaeological heritage of Florida through advocacy, education and historic property stewardship. The Trust annually announces Florida’s 11 most endangered historic sites in order to increase the public’s awareness of the urgent need to save Florida’s neglected or threatened historic resources and empower local preservationists and preservation groups in their efforts to preserve Florida’s rich history.

The first mention of Conch Key and its baby sister island to the southwest, Little Conch Key, can be dated back to the mid-19th century, according to local historian Jerry Wilkinson. The two islands were first documented in the 1849 memoir of F.W. Gerdes, “Reconnaissance of the Florida Reefs and All the Keys.” “The first…

Pirate tales and the Florida Keys go together like ice and rum. Unfortunately, in the same way a glass of rum starts to water down when exposed to the still, sweltering subtropical heat, the details surrounding piratical tales have a way of becoming diluted, too. They also have a way of taking on lives of their…

Islamorada Alligator Reef – This was my second ever snorkeling trip and I feel that I have now just about advanced from ‘wimp’ status to ‘slightly nervous snorkeler clenching a noodle’. I smugly noticed that some people were more wimpy than me on this trip. It was satisfying to hear intermittent shrieking that definitely wasn’t my…

1964: The Hemingway House was formally dedicated as a museum honoring the memory of the late Nobel and Pulitzer Prize winner who lived in Key West in the 1930s. The house stands at an elevation of 16 feet above sea level, and is still the second-highest site on the island. It was originally built in…

BY JOSH GORE Free Press Staff A group of federal maritime archaeologists are trying to uncover more details of a sunken slave ship near Delta Shoals off Sombrero Reef. Locals name the area The Ivory Wreck, which is located a few hundred yards away from the lighthouse. The name stems from ivory tusks discovered…