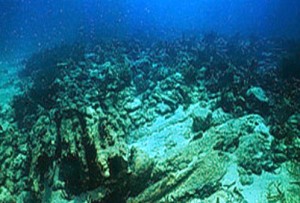 A group of federal maritime archaeologists are trying to uncover more details of a sunken slave ship near Delta Shoals off Sombrero Reef. Locals name the area The Ivory Wreck, which is located a few hundred yards away from the lighthouse. The name stems from ivory tusks discovered on the wreck site in the late 1940s. It was common for ships involved in the slave trade in the Americas to continue on to Europe with ivory and other goods to trade there, according to historians. The late pioneer treasure hunter Art McKee helped in the wreck’s discovery and salvaged silver bars and other items, according to The History of Diving Museum in Islamorada. Shackles and a cannon with foundry numbers were also discovered there. However, historians have not been able to trace back the ship’s origin. Some believe it sank in the 1850s, while others suspect the ship went down earlier.

Last week marked the first visit to the site by a National Oceanic and Atmospheric Agency archaeology dive team. The wreck, though, is a frequent stop for spearfishermen and lobster hunters during season, local dive shops say. “The site has the potential to tell us a lot about the North American slave trade,” said Matthew Lawrence, a NOAA maritime archaeologist based out of Scituate, Mass. Lawrence was one of a handful of researchers last Thursday snorkeling and diving the site, which sits in about 18 feet of water. Finding the wreck proved to be one of the more challenging parts of the day. The 3-foot chop didn’t make things easier for anyone. “Don’t believe everything you read on the Internet,” Lawrence quipped after spending 20 minutes at the first stop, only to fall short of finding the wreck. Because the wreck is not commonly visited by NOAA, Lawrence and Florida Keys Marine Sanctuary Maritime Heritage program organizer Brenda Altmeier had to rely on coordinates posted online by other divers.

Also in attendance was Bruce Terrell, a NOAA senior historian and archaeologist from Silver Spring, Md. After locating the wreck, the group photographed the base of the site, hoping a later analysis might reveal new information. They also plan to launch a public outreach effort to encourage individuals to share any objects they might have salvaged from the wreck. Today, little remains of the wreck, other than a small marker showing its location. Still, the visit to the site was poignant as the group reflected that the area was the final resting place for enslaved Africans who where likely shackled in the ship’s hull when it sank. “I want to know who has those shackles, or if they still exist,” Lawrence said. “The reason this is a slave ship makes it that much more interesting.” Lawrence said the act of taking people thousands of miles from their home only to have them drown in chains compounds the tragedy of slavery. “This was a horrific passage,” he said.

Lawrence was at The History of Diving Museum Wednesday, May 20, to speak about another sunken ship, Hannah M. Bell. The 315-foot steel-hulled steamship grounded on Elbow Reef, about 6 miles off Key Largo, in April 1911. With the ship’s engine room and holds filled with water, salvage efforts were abandoned days after the grounding and heavy weather tore the ship apart the following month. No lives were lost in the accident.“This is really interesting and important to the public,” said Altmeier, who organizes speakers and outreach events to educate the public about the historical significance of the sanctuary.People looked at oceans much differently than they do now, Lawrence added. “We look at them as obstacles, but before they were considered highways,” he said.