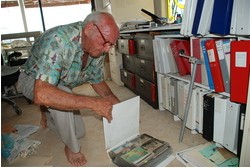 The view out across the Atlantic from Jerry Wilkinson’s house is the stuff of dreams. Between the mix of sky and ocean exists differing shades of blue for as far as the eye can see, while inside the house exists of bit of historical chaos. Walls are lined with books and old cameras, glass bottles and books and more books. Filing cabinets stand like sentinels marking his office space, and more bookshelves are stuffed with albums filled with hundreds and hundreds of historic photographs. There is also a back room where treasures like maps, old newspapers and microfilm are stored. In the three or four decades Jerry has spent collecting documents, photographs and anything else he could get his hands on, he has managed to create a rather substantial resource. Jerry spent years driving around the state in an RV visiting both university and government libraries in search of information about the Florida Keys in general and the Upper Keys in particular. He made copies of everything he could and took as many pictures (and sometimes more) than library officials would allow.

I would hazard to bet that Jerry Wilkinson has amassed the greatest private collection of not just the Florida Keys, but Upper Keys history in the world. The statement cannot be declared an absolute, but I would like to challenge any and everyone to reveal one that is greater. Without any further digressions, the point I am trying to make is that it would be amazing to place Jerry’s expansive collection in a climate-controlled room where people could have access to the material in order to do research on the Florida Keys (and the Upper Keys in particular) in a relaxed well-lit environment. One of my jobs as curator at the Keys History & Discovery Center is organizing the creation of just such a place. It is called the Jerry Wilkinson Research Library, and the good news is that I have the room. I have a great room. In addition to the main exhibition floor and the 35-seat movie theater currently under construction, the second floor of the Keys History & Discovery Center has two additional rooms. One of these rooms has been designated the Jerry Wilkinson Research Library and will be a place where interested parties will be able to dig deeper into the rich history of these islands.It is my goal that the Jerry Wilkinson Research Library be able to acquire the kind of resources enabling it to become the preeminent source when researching the history of the Upper Keys. It will one day house newspaper articles, books, magazines, photographs and maps regarding topics pertinent to the Florida Keys with a special emphasis on documents pertaining to the Upper Keys.

Jerry has spent decades of his life documenting the history of the Florida Keys and creating a space for his collection is a way for me to honor the man who has given so much of himself to not only the community, but to me. The endeavor will require that steps be taken. The first step was the construction of a suitable building. Check. The second step was obtaining some kind of ownership of the space. Check. The not-for-profit Florida Keys History and Discovery Foundation has a 50-year lease. Because the man who owns the property and financed construction of the building wanted to offer the Florida Keys communities and visitors alike the chance to explore the amazing breadth of history associated with these islands, the deal was struck at the price of $1 per year. So, check. The next step was designating a room to accommodate the Jerry Wilkinson Research Library. Check, which is to say that the foundation for the project has been set. In order to create a repository where scholars, history buffs and those looking to learn the historical details of Florida’s southernmost archipelago can sit at a table and research I need help. For starters, I need desks, tables, filing cabinets, bookshelves, map cabinets, chairs and a computer. Perhaps a couple of plastic plants to add a bit of color would be a nice touch, but those are details that can be addressed later.

As a 501(c)(3) the Florida Keys History and Discovery Foundation is accepting donations specifically for the project. If you would like to help create the Jerry Wilkinson Research Library with your tax-deductible contribution please contact the Keys History & Discovery Center at 305-922-2237 or . Checks can be mailed to P.O. Box 1124, Islamorada, FL 33036. All monies collected for this endeavor will go directly to the purchase of materials needed to create the Jerry Wilkinson Research Library.Please help.

Brad Bertelli is a published author of four books on Florida and Florida Keys history. He is the curator of the Keys History and Discovery Center, located at the Islander Resort. His column will appear every other week in The Reporter. Reach Brad with comments and questions at .