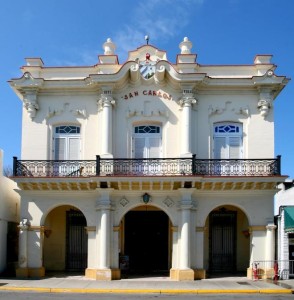 A stately edifice on Key West’s Duval Street with high arches, a wide wrought-iron balcony, and large windows shaded by wooden louvers, the building that houses the San Carlos Institute is the property of the Cuban Government, a situation that has remained unchanged since long before the revolution of the 1950s. Founded by Cuban exiles in 1871, the institute fostered the first Cuban revolution, when José Martí and others rallied here for the cause of independence from Spain.

The current building was constructed after a 1919 hurricane destroyed the institute’s older structure. Indebted to the institute for its help, the Cuban government provided $80,000 and one of Cuba’s best architects, Francisco Centurión, to them build a stately new home that would also serve as a consulate for the country.

The new building was Cuban in every way, much like Cuba’s consulate in Miami. It had high ceilings, large and spacious rooms, floors of marble and Cuban tile, intricately tiled walls, and an auditorium. It opened in 1924. Today the San Carlos Institute serves much the same function it has for the last century and a half, as a Cuban cultural center, museum, and educational facility, and the building is still technically owned by the Republic of Cuba.