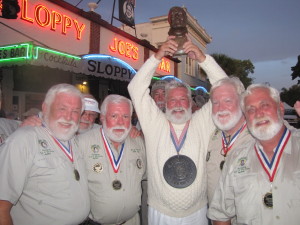 Marcus D’Angelo and Mike Hogan look nothing like Ernest Hemingway, but that didn’t stop the Missouri teachers from donning the requisite khaki safari garb, ordering two Cuba Libres at Sloppy Joe’s and paying homage to the famed author Tuesday afternoon.

“Look at us,” D’Angelo said, running a hand through a mane of dark curls that stood out among the growing crowd of white-haired, would-be writers in town for Key West’s 35th annual Hemingway Days celebration that runs through Sunday.

“And I can’t grow a good beard,” the clean-shaven Hogan added. “We obviously wouldn’t even consider entering the look-alike contest; those guys are dead ringers. But we’ve been bringing our wives down here for the festival for the past four or five years. It’s just a good time over our summer vacation.”

Hogan was referring to the legendary “Papa” Hemingway Look-Alike Contest that each year draws about 150 contestants and several hundred spectators to Sloppy Joe’s Bar. Starting Thursday evening, the field of contestants is narrowed each night until Saturday evening’s final round of competition, when former contest winners select the 2015 Papa Look-Alike. The contest rounds start at 6:30 p.m. Thursday, Friday and Saturday and are free for spectators.

Produced by the Hemingway Look-Alike Society, the contest raises money for the society’s scholarship fund. One Florida Keys student will receive a scholarship from the society at 6 p.m. tonight.

Most entrants strive to imitate the quintessential image of the sportsman author, wearing multipocketed safari gear or a thick, cable-knit and cowl-necked wool sweater, and sporting a full, white beard under a mop of gray-white hair. The white-haired would-be writers will fill the lower blocks of Duval Street for a series of events, including a tongue-in-cheek Running of the Bulls and a street fair on Duval Street, both on Saturday.

A host of other events will take place this week elsewhere on the island that Hemingway called home from 1931 to 1940.

The Key West Marlin Tournament will honor the author’s game-fishing affinity, while tonight’s  “Voice, Places, Inspirations” event at the Hyatt Key West Resort features readings and book-signings by local writers, who also found inspiration on the island. The Key West Poetry Guild will present “Papa’s Poems” at 5 p.m. Thursday at Blue Heaven, and the author’s granddaughter, author Lorian Hemingway, will announce the winner of the Lorian Hemingway Short Story Contest at 8 p.m. Friday during a reception at Casa Antigua on Simonton Street, where Ernest Hemingway stayed when he first visited Key West in 1928.

A sunset 5K race and paddleboard race will take place Saturday, while the annual Sloppy Joe’s Hemingway Days Arm-Wrestling tournament at 11 a.m. Sunday caps off five days of events that honor the author and sportsman who left Key West in 1940 to make his legendary literary mark on another island just 90 miles away.