The bill, signed Tuesday 5/23/17, does increase penalties for shark finning and codifies a Florida Fish and Wildlife Conservation Commission rule prohibiting this practice, but does not go as far as shark conservation groups wanted. The original version of the bill would have made it a first-degree misdemeanor in the state to trade or sell shark fins and tails, as well as suspend or revoke permits for commercial and recreational fishermen found in violation. However, lawmakers removed the language regarding sale and trade and they substituted language that calls for the serious punishment for fishermen found in possession of fins. 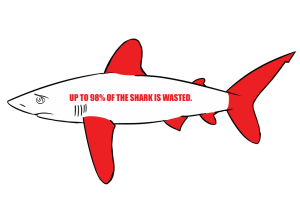 Conservation groups, such as Oceana, had been calling for an outright ban on the sale of fins. Oceana has contended that 73 million sharks are sold on the global market every year. Roughly, 70 percent of the most common shark species involved in this global fin trade are considered at risk for extinction.

Oceana recently conducted a study that found that sharks are far more valuable alive than dead. The study reported that divers contributed $221 million in revenue for the state in 2016 seeing sharks on dive excursion, which supported 3,700 jobs. By contrast, the selling of shark fins nationwide only generated $1 million.

A federal bill, the Shark Fin Sales Elimination Act, has been introduced that would eliminate shark finning nationwide.

State Rep. Holly Raschein, R-Key Largo, admitted the state bill did not go as far as some conservationists wanted it to, but called the bill a good compromise. “Although it is not a complete ban, because there are still some fishermen out there who still do the right thing, who harvest and use the whole shark, it does significantly increase the penalties,” Raschein said Wednesday.

Do you know how many parks there are in the Upper Florida Keys? Me neither. Between the City Parks: Islamorada’s Founders Park and Anne’s Beach, Monroe County Parks: Harry Harris, Florida State Parks: John Pennekamp and Lignumvitae and the National Parks-Refuges-Sanctuaries: Everglades, Crocodile Lake and the all encompassing Florida Keys National Marine Sanctuary, you are…

Five out of the top 10 fishing destinations are in Florida. Fishing trips and vacations are big business in the U.S. each summer, and this week the Recreational Boating and Fishing Foundation, and its Take Me Fishing campaign, is unveiling the 2015 Top 100 Family-Friendly Places to Fish and Boat. Florida’s Everglades National Park is…

The recreational harvest season for snook starts Sept. 1 statewide with the exception of state waters from Pinellas/Hillsborough counties (including Tampa Bay) south to Gordon Pass in Collier County. These waters are catch-and-release for snook due to impacts from red tide. Unique to the region, snook are one of the many reasons Florida is the…

Information: Florida residents and visitors can experience Florida’s unique saltwater fishing opportunities without being required to have a recreational saltwater fishing license on Nov. 24. All bag limits, seasons and size restrictions apply. There are eight license-free fishing days each year including four freshwater and four saltwater. Fishing licenses can be purchased at 1-888-FISH-Florida or…

Islamorada Charter Captains are hopeful. Offshore and flats charters “are a huge factor” in Islamorada’s tourism economy, said Judy Hull, executive director of the Islamorada Chamber of Commerce. “A large percentage of our tourists come here for the fishing,” she said. “That’s why we’re known as the Sportfishing Capital of the World.” Nearly all the big…