Standing just east of U.S. Route 1 at mile marker 82 in Islamorada is the Florida Keys Memorial Hurricane Monument designed by the Florida Division of the Federal Art Project and constructed using Keys limestone (“keystone”) by the Works Progress Administration.

Unveiled in 1937 with more than 4,000 people in attendance, a frieze depicts palm trees amid curling waves, fronds bent in the wind. In front of the sculpture, a ceramic-tile mural of the Keys covers a stone crypt, which holds victims’ ashes from the makeshift funeral pyres. The memorial was added to the U.S. National Register of Historic Places on March 16, 1995.

Related Post  Upgrade Sought to the Hurricane Monument in Islamorada 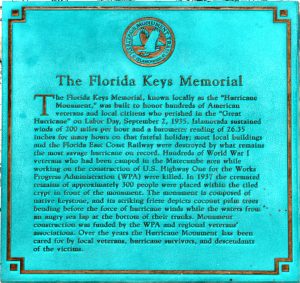 The Florida Keys Memorial, known locally as the “Hurricane Monument,” was built to honor hundreds of American veterans and local citizens who perished in the “Great Hurricane” on Labor Day, September 2, 1935. Islamorada sustained winds of 200 miles per hour and a barometer reading of 26.36 inches for many hours on that fateful holiday; most local buildings and the Florida East Coast Railway were destroyed by what remains the most savage hurricane on record. Hundreds of World War I veterans who had been camped in the Matecumbe area while working on the construction of U.S. Highway One for the Works Progress Administration (WPA) were killed. In 1937 the cremated remains of approximately 300 people were placed within the tiled crypt in front of the monument. The monument is composed of native keystone, and its striking frieze depicts coconut palm trees bending before the force of hurricane winds while the waters from an angry sea lap at the bottom of their trunks. Monument construction was funded by the WPA and regional veterans’ associations. Over the years the Hurricane Monument has been cared for by local veterans, hurricane survivors, and descendants of the victims.

When the strongest hurricane of the 20th century slammed into the Florida Keys on Labor Day Weekend, 1935, it was as if its 200-mile-an-hour winds had conspired with politics, the Depression, and petty bureaucracy to turn disaster into tragedy. Among the 423 dead were 259 World War I veterans who had been sent by Roosevelt’s New Deal to live in tent cities and build a highway across the keys.

Arriving from Key West in the aftermath to help rescue his fellow veterans, Ernest Hemingway was outraged to learn that they had been prevented from escaping the storm—first by government stinginess, then by the National Guard. His public censure of the government spurred an investigation that many called a whitewash. Hemingway’s Hurricane tells a tale of terror, heroism, incompetence, and compassion in the face of the overwhelming power of nature.