The towering hurricane monument at mile marker 81.8 could soon be the recipient of an expansion effort. Islamorada’s Historic Preservation Commission is interested in enlarging the lesser-used back area of the Florida Keys Memorial to attract more visitors there. “For starters, we want to erect a large map,” commission Vice Chair Barbara Edgar told the Free Press. The commission, chaired by Michael Bier, would also like to add more specific information on new, larger walls about those memorialized at the site. 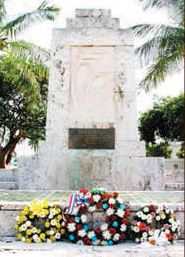 Currently, this open area of the hurricane monument displays only two informational placards and offers a couple of benches. Both placards, paid for through a 2008 grant, tell of the significance of the monument The monument was dedicated in 1937 before roughly 4,000 people. It commemorates the devastation of the Labor Day hurricane of 1935, which took the lives of hundreds of military veterans working on a highway project as well as local residents.

The Historic Preservation Commission is set to discuss the proposed upgrades at its March 18 meeting before bringing a formal recommendation, including a price tag, to the council. If given the OK, the commission would likely need to secure grant money, unless the council offers to cover the full cost. “Anything that preserves the rich history of Islamorada, and add the possibility of grant funds available, is a win-win for our community,” Village Councilman Mike Forster said. Aside from the monument, Edgar said the commission has also considered redoing the four informational placards found at the red caboose at mile marker 82.6, bayside. There, the former home of the Islamorada Chamber of Commerce, visitors can peruse a small area while learning about the old Over-Sea Railroad, the early settlers of Upper Matecumbe Key and other local history. “They’re all in very bad condition,” Edgar said.

REEF Ocean Explorers Summer Camp will immerse you into an ocean of learning and fun! Explorers will be exposed to the underwater world, all of its amazing creatures, and a week filled with creative activities and adventures. Discover all that the ocean has to offer and experience conservation actions in the sunny, salty, and the…

The history of Lignumvitae Key dates back in time when the islands of the Florida Keys were a living coral reef. Sea level has fluctuated over time and has been as much as 300 feet lower than today and as much as 60 to 100 feet higher than today, drastically changing the footprint of the…

SOUTH REGION B – MONROE COUNTY Lieutenant Payne along with Officers Piekenbrock and Martino were on routine water patrol in Waltz Key Basin north of Key West. Shortly after sunset the officers noticed a small skiff returning from offshore with no running lights. The officers followed undetected until they were in close proximity of the skiff….

By Scott Mackenthun “Bow to the king,” advises fishing guide Rick Stancyk. His advice is a simple reminder that when tarpon jump, you should drop your rod tip and give slack so the hook doesn’t pull out, in effect bowing when the powerful fish pushes through a series of leaps. Stancyk is a second-generation fishing…

Bloodline managed a great first run on Netflix last year, with a family drama full of secrets and lies, brought out by the return of outcast son Danny, mesmerisingly performed by Ben Mendelsohn.Now season 2 is almost upon us and it turns out things aren’t going to get any easier for the Rayburn family.This new…

Write yourself a fantasy in the author’s $3.4 million waterfront abode in Islamorada, FL. Filled with all the trappings of island life, the home is a sweet ode to the Florida Keys penned by the best-selling author Carl Hiaasen. Carl Hiaasen, a nearly lifelong Florida resident, began his writing career as an investigative reporter before turning to fiction. His novels…