Divers installed a bronze plaque last week identifying the final 250 of 1,000 contributors to a project that sank the former U.S. Navy ship Spiegel Grove 15 years ago as an artificial reef in the Florida Keys National Marine Sanctuary. On May 17, 2002, as the 510-foot-long former landing ship dock was undergoing final preparations for a dramatic sinking that afternoon, the vessel began to rapidly take on water and rolled over, leaving its upside-down bow protruding above the Atlantic Ocean’s surface. There were no injuries as workers exited the ship, but the sinking-gone-bad garnered news coverage around the world.

Three weeks later a salvage crew fully scuttled the ship, but it came to rest on its starboard side in 130 feet of water. The wreck soon opened for diving but the Spiegel Grove story did not end. In July 2005 wind and currents, emanating from Hurricane Dennis when it was southeast of the Keys, pushed the ship upright into the position originally intended. About half of the project’s $1.5 million cost was paid for by the Monroe County Tourist Development Council, with the balance coming from private donations helped by a Key Largo Chamber of Commerce program that sold 1,000 lifetime dive medallions for $250 each. 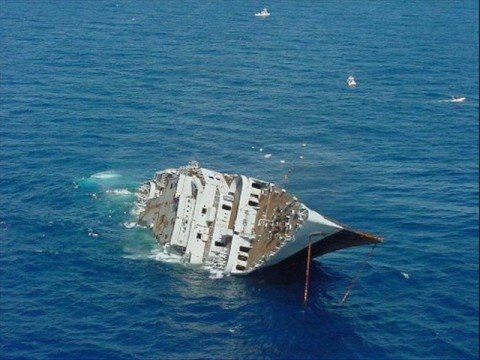