Original Print Publish Date: October 21, 1989 – Key West’s Robert the Doll – If there are such things as ghosts and possessed things, souls wandering in search of a peace denied them in life, then Key West is a perfect place for them to flourish. If you know where to look, however, you can still talk to people who experienced something strange first-hand. The spirits are there, pushed to the perimeter, but still looking for an answer to the story of their lives . . . and what came after.

The snapshot is blurred, as if the camera or the object it was photographing moved. It is too poor in quality to be reproduced, but it is just as well, for the image is unsettling. The picture shows a doll about the size of a 6-year-old child, dressed in a pink and green harlequin costume. Its face is round, but with pinched features. The eyes are blank black beads. The overall effect is subtly unpleasant. 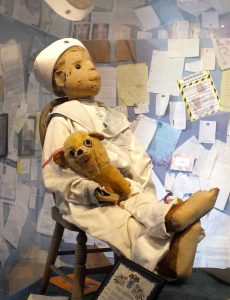 Robert Eugene Otto loved this doll. He had loved it since he was a child, in the early part of this century, when it had been given him by a black girl his parents helped raise. Gene Otto adopted the doll as his alter ego and named it Robert. When he would get in trouble he would blame the doll. “Robert did it,” he would say.

Otto grew up, met his future wife at the Sorbonne and brought her home to Key West to live with Robert. In the family house at 354 Eaton St., he built a special attic room for Robert, complete with its own proportionately correct furniture and toys. It was about this time, in the ‘40s, that stories about Robert began to leak out of the house.

A plumber doing work in the attic swore that he heard the doll giggle. When he turned his back, then looked at the doll again, it had moved to a different place. Little beaded voodoo figures that rested in Robert’s lap would occasionally be found against the opposite wall, as if Robert had heaved them in a fit of temper. It was said that the doll was, in some strange way, aware of what went on around him.

Gene Otto worked as an artist and he was not without talent; some of his still lifes hang in the Key West library, but their draftsmanship and proportions are slightly awry and the heavy use of green and black gives the paintings an uncomfortably funereal beauty.

Gene Otto died in 1969 and it was said that in the months preceding his death, as his health failed, he spent a great deal of time in the attic room, talking to Robert. A few years later, when his wife became ill with the cancer that killed her, she sold the house, with the proviso that the attic room and a cedar chest in it that contained Robert, would be undisturbed.

It was in the late ‘70s that Malcolm Ross, a teacher at Florida Keys Community College, was invited to look at Robert and his room by some friends who were renting the house. He walked into the room and felt a kind of strange force field.

Ross was riveted by Robert’s eyes. “At first, when we walked through the door, the look on his face was like a little boy being punished. It was as if he was asking himself ‘Who are these people in my room and what are they going to do to me?’ “

Ross’ friends explained the legend that surrounded Robert and began pointing out the kiddie furniture. Ross looked at the doll and noticed a change in its expression. It seemed that Robert was following the conversation.

Ross’ friends made an airy comment, about what a fool Otto must have been to make such an emotional investment in a doll. When Ross glanced at Robert, he saw an expression that he remembers as “disdain.” This doll is listening to us, he thought.

Soon after, the man who had bought the house from Otto’s widow died of carbon monoxide poisoning from a faulty exhaust system in his car. It was then purchased by Tom Belford. Somewhere in all this, Robert vanished; nobody who lives in the house now has ever heard of him.

Gene Otto is buried in the family plot at the Key West cemetery. It is fenced in and bricked over, like a patio. There is a statue of a deer there, to mark the grave of a particularly beloved family pet. Beside, Otto, his wife and his parents, several dogs are interred. There was, evidently, no place for poor Robert, which is surprising. It was the least Gene Otto could have done. Whatever their bargain was, Robert appears to have kept up his end.