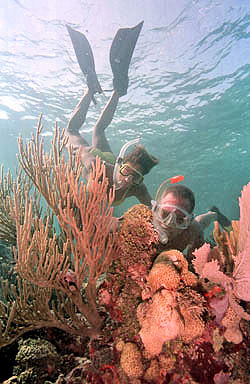 Last week my wife, Pat, and I spent our 30th anniversary in Key West, Fla. I know … why in heaven’s name would anyone in their right mind go to Florida in the summer?

Well, Key West is actually in the tropics, and the temperatures were between 87-90 degrees. I didn’t think that was too bad. What I didn’t take into account was the heat index. That made it over 100 degrees every day. When you can stand still in the shade and sweat, it’s hot. But, it’s right on the ocean. There’s got to be some breezes coming in off the water. Wrong! Totally blue, cloudless skies and not enough breeze to move the leaves on the trees. It felt like I was in the oven with the Thanksgiving turkey.

One of the things I planned on doing was snorkeling or scuba diving on the reefs. Scuba was out of the question because they were booked until our last day, and you can’t scuba within so many days or hours of flying. So I went out on a catamaran and snorkeled.

It took the boat an hour to reach the reef. On the way, a young woman passed out inflatable life jackets, fins and snorkels. We also received instructions and helpful hints. Florida Keys Snorkeling

Now let me tell you my problem. I can swim, but I can’t float. I know some of you will say everyone can float. Nope. I’ve even been to the Y to learn, and I can’t. If I stop moving, I sink right to the bottom. It’s always been that way. So I blew some breaths of air into my life jacket and did very well.

Once in the water I soon got the hang of things. Sure, I took in a little water but blew it out through the snorkel as instructed. Believe me, that sea water tastes terrible. They told us that the water in the Keys is the second saltiest in the world. I believe it. If you were stranded without water in the ocean, you couldn’t even try to drink it.

Slowly, I worked my way with the others out away from the boat and over the reef. What a magnificent sight. Ten or twelve feet below me, the coral rose up off the Caribbean floor. It was jagged and covered with life. Actually, the coral is a living organism. It moves and constantly grows. Around it were dozens of fish. There were yellow-tailed snappers, bright blue tangs, spotted grunts and schools of others with yellow stripes.

Before we left the boat we were told of reef sharks but not to worry. They wouldn’t bother us. I didn’t see any, but as I swam along, I spotted a fairly large barracuda swimming beneath me, moving out from the coral. I was probably 12 feet above it and could still make out his mouthful of razor-sharp teeth. Between two sections of the coral a sting ray moved slowly along the bottom.

Jelly fish also posed a danger. They seemed to be everywhere. We were warned not to touch the purple ones, but they were the only ones we saw. A fellow brushed up against one with his side and thigh. Both areas turned red and he said it hurt like (heck). The girls sprayed something on the area to ease the pain.

Actually, I was a little disappointed. I expected far more. Part of the problem was the ocean currents. It seems that this time of year the currents bring in large mats of seaweed, and the water is slightly off color. I had hoped to see far more fish of many varieties.

Finally, I had enough and made my way back to the boat. The trip back to shore was actually a booze cruise. We could have all the beer, wine or mixed drinks we wanted as a guy with a guitar sang Jimmy Buffet and other island songs. The crew got some of us up dancing as the sun dropped into the sea. The trip was great, and the sunset was a fantastic ending to a very wonderful day.