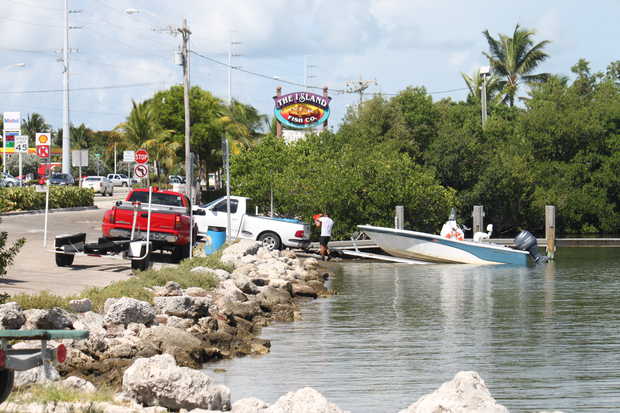 A suggestion that the city of Marathon should explore purchasing land next to the boat ramp on Harbor Drive behind the Florida Keys Marathon International Airport brought protest from residents at a Thursday budget workshop.

With some residents vehemently opposed, that shifted the discussion to perhaps purchasing the former Quay property next to the Island Fish Co. around mile marker 54 bayside; the city owns an adjacent boat ramp there. It was a restaurant and retail complex before Hurricane Wilma wiped it out in 2005; it now lies bare. It’s assessed value is $2.2 million.

That drove some residents living in neighborhoods near Aviation Boulevard to voice their opposition Thursday to the councilmen, meeting at the main Marathon fire station.

“We need to decrease the use of this ramp and get it back to local usage as much as possible,” attorney Tom Wright said. “It has evolved from a neighborhood facility to a big tourist draw — don’t shove tourist facilities down our throats in an inappropriate location.”

“It’s obvious that you folks said it doesn’t make sense to purchase that property,” John Hunt said of the Harbor Drive site. “Thank you for reconsidering. The first idea was not a good idea.”

City Manager Mike Puto said the popularity of the Harbor Drive boat ramp comes from the Internet, where he’s seen it advertised as being one of the best ramps in the Florida Keys.

The opposition from residents prompted Senmartin to suggest requesting TDC money to purchase the former Quay land instead. The estate of Gus Boulis owns the nearby property.

Boulis was murdered in Fort Lauderdale in 2001 in a power struggle over his Key Largo-based SunCruz Casinos business. On July 1 this year, Anthony “Big Tony” Moscatiello was convicted of first-degree murder. Anthony “Little Tony” Ferrari was convicted in 2013 and is serving life in prison. The reputed gunman was John “J.J.” Gurino. He was shot to death in Boca Raton in 2003 during an unrelated dispute.

Tavernier attorney Nicholas Mulick oversees the estate and did not return calls before press time.

Keeping the Harbor Drive boat ramp exclusive to locals could present a challenge to the city, councilmen admitted.

“The original intent was this is for the residents of Marathon. It would be great if we could restore it to that,” Councilman Dan Zieg said. “I think the idea of restoring the original hours of sunrise to sunset is a good idea. Stricter enforcement on parking may also be helpful.”

Councilman Bill Kelly suggested closing the ramp to motorized vessels altogether and rebranding it for kayaks and paddleboards.

“There would be no motors and pollution. It would take care of the residents there and the noise,” Kelly said. “As far as curtailing the hours, I don’t know how we could do that. Let’s close the ramp and open it up to kayakers. Let our kids go fishing down there and make it easier for them to go swimming.”

Councilmen agreed the issue would need more discussion and instructed Puto to add it to an upcoming City Council agenda.