Research provided by the Bonefish & Tarpon Trust in conjunction with local guides in the Florida Keys has provided state biologists with information suggesting that the May through July closed season for harvesting spawning permit may not be long enough. 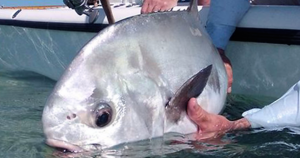 The Florida Fish and Wildlife Commission in 2011 created a Special Permit Zone — state and federal waters south of Cape Florida in the Atlantic and south of Cape Sable in the Gulf of Mexico — to protect spawning permit from over-harvesting.

However, BTT is now proposing an expansion of the protected spawning months to include the month of April as well. The group’s ongoing Permit Acoustic Tracking Project in conjunction with two Keys guides’ associations has revealed that large numbers of these fish actually start showing up in April, when harvesting is still allowed. BTT says many guides back this proposed expansion to help protect not only offshore spawners on the wrecks and reefs, but permit that travel from the flats into deeper water to spawn. “The permit we fish for on the flats are out on the wrecks and reefs, spawning and being harvested in April. Extending the closed harvest season to April provides needed protection for those spawning fish that drive our industry,” says Captain Doug Kilpatrick, commodore of the Lower Keys Guides association.

After more research, BTT is asking that FWC pushes the expansion of this regulation to close in April. Members of the Florida Keys Fishing Guides Association and the Lower Keys Guides Association support the concept of extending the closed season and hope that it will be the outcome at the December 2017 FWC Commission meeting in Gainesville.

“This project is an excellent example of how information that is gained only though scientific research can be utilized toward the protection of a cherished and important game fish species here in the Keys,” says Capt. Pete Frezza, a member of the FKFGA board. “It shows why finding answers through Science is so important.”

BTT is seeking input on this proposed regulation change.

A Summerland Key [Lobster Mobster] fisherman [in the past he has been identified as from Big Pine Key] arrested in October 2014 for lobster fishing with hundreds of illegal traps was arrested again Thursday for lying on a wildlife form about his marine violation history, according to court records. Lobster Mobster – David Lee Boggs,…

The device is called the Zoo-Keeper Lionfish Containment Unit, and word of mouth has turned it into a must-have Lionfish capture device for many recreational divers in the Caribbean and Florida. Sarasota entrepreneur Allie ElHage didn’t know anything about the lionfish until late 2011. Four years later, after designing a device that divers use to…

Snook, spiny lobster, reef fish, sharks from shore, blue crabs and stone crabs caught in traps: What do all these have in common? They each require a special add-on permit, designation or registration on your recreational fishing license. Maybe you’ve heard of these specialty designations, some of which have been around since before the Florida…

At its February meeting in Crystal River, the Florida Fish and Wildlife Conservation Commission (FWC) approved several changes to the spiny lobster bully net fishery, including directing staff to launch a “Respectful Bully Netting” outreach campaign. The FWC has received input from stakeholders about the increasing participation in the commercial bully net lobster fishery, and…

So-called casitas, an alternative to conventional traps, are used throughout Latin America. Although using them in the U.S. would offer environmental advantages, opposition by traditional fishers make it unlikely they will be legalized in anytime soon By Erik Vance Lifting a lobster casita is easier than it looks. The device is little more than an…