In the early 1900s, thousand of tourists were coming to Florida. They came to stay in the new hotels, rest in the warm weather, enjoy the natural beauty, and some even came to recover from illnesses. Many wealthy people, such as Thomas Edison, Harriet Beecher Stowe, and Henry Ford, built winter homes in Florida and visited for months at a time.

The invention of the automobile also made travel easier for people. As cars became less expensive and people had more leisure time, more people had time to go on vacation. Hotels and resorts were still expensive, so some travelers brought their own beds and food. They slept in their cars. Since their food was usually in tin cans, these travelers were known as “tin-can tourists.”

The Florida Land Boom during the 1920s brought increased tourist activity to Key West. One new addition was the F.E.C. Casa Marina hotel. In February 1918, the F.E.C. Railway purchased the property for $1,000. Construction began in the spring and the formal opening was New Years Eve, December 31, 1921. Louis Schutt was moved from the Long Key Fishing Camp to be the manager. It closed indefinitely in the spring of 1932 – the Great Depression had arrived in Key West.

How did Key West become a Tourist Town? 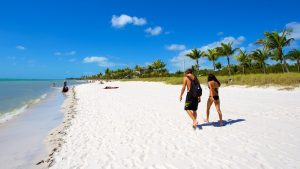 It is 1934, the end of the Great Depression and the beginning of President Franklin Roosevelt’s New Deal.

Once Florida’s largest city, the Conch Capital had seen its population plunge from 26,000 to 12,000 in 24 years. The cigar industry—11,000 jobs—had moved to Tampa and the sponge diving trade to Tarpon Springs. The era of shipwreck salvaging, the nefarious pursuit which once made Key West America’s richest city in per capita income, was long gone. Even the Navy was moving out after more than a century. Its biggest hotel and the only railroad serving the town were both bankrupt. Eighty percent of the Conchs were on welfare.

The city celebrated the Fourth of July, 1934, by declaring itself bankrupt. Key West surrendered all its legal powers to the state. Florida had problems of its own, so it passed the island kingdom off to the federal government.

Julius Stone Jr. was appointed to turn Key West around. He decided to turn Key West into a tourist mecca. Stone was an arrogant, high-handed administrator. Many things he did were illegal and it is apparent that he continually bypassed democratic procedures. He made deals that FERA guidelines did not permit. If he wanted it done, he just did it. But within a year unemployment was cut by two-thirds and business at hotels and restaurants boomed. Two years after the program started a proud Key West was able to resume the basic task of governing itself again.

2.25 million tourists visited the Florida Keys in 2016. According to the TDC, the tourism industry employs 54 percent of the Keys workforce. The value of Monroe County’s tourism is $2.7 billion and 60 percent of spending in the county is attributed to tourism.

What does this mean to residents of the Florida Keys? The numbers of tourists will continue to climb. The local governments will need to find methods to reduce the problems associated with a popular tourist destination while at the same time use the income to improve the resident’s lives. And the residents will have to decide to “Love It or Leave It.”

1 thought on “Florida Keys Tourism – Love It or Leave It”