Florida Keys Fishing Tournaments offer a variety of competitive fishing opportunities throughout the year. Whether one wants to prowl the reefs and wrecks for yellowtail and grouper, stalk the backcountry in search of bonefish, tarpon or permit, or troll the blue waters for dolphin and sailfish, there’s a tournament to fit the bill. The calendar below lists tournaments promoted by the Monroe County Tourist Development Council’s Fishing Umbrella. 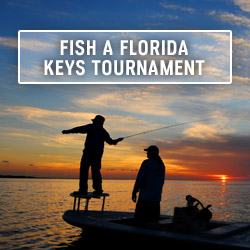 Sept. 10, Key Largo Lionfish Derby for Divers. Teams of up to four divers compete for cash and prizes. Derby divers who successfully remove invasive lionfish from sanctuary waters can win for most, largest and smallest lionfish. The Upper Keys derby is held at John Pennekamp Coral Reef State Park. Visit REEF website to register; teams of up to four people can join. Divers can participate in a derby from their own private vessel or join a professional dive operator’s charter. Contact: 305-852- 0030 or .

Sept. 22-25, Marathon Marathon International Bonefish Tournament. This challenge recognizes individual and team champions scoring the largest bonefish and permit, and the top anglers in fly and grand slam divisions (for the top spin or fly angler who releases the largest bonefish, permit and tarpon “slam”). The event is one of the few tournaments where anglers can fish without a Catch one of many Keys fishing tournaments professional guide. Contact: 305-304-8682 or .

Oct. 9-12, Islamorada Islamorada Fall AllTackle Bonefish & Permit Championship. Known locally as the “Fall AllTackle,” the three-day fishing challenge was founded in 1970. Up to 25 participants can fish in the tournament; festivities kick off Oct. 9, followed by fishing. One angler per boat pairs with a licensed captain to vie for division winners’ trophies. The three largest bonefish and three largest permit are to be scored by length, not weight. Contact: 305-587- 1460 or .

Oct. 21-23, Islamorada Ladies Let’s Go Fishing! Annual Keys Fishing University for Women. Female fishing fans can learn or polish angling skills during the award-winning weekend seminar. More than 8,000 female graduates have immersed themselves in the lighthearted yet skill-heavy curriculum to learn and hone abilities in offshore, bottom, inshore and fly fishing. Contact: 954-475- 9068 or .

Oct. 29-30, Islamorada Fall Backcountry Fly Championship Series. Tournament anglers are to compete to catch the most inches of snook and redfish on fly in a challenge where one inch equals one point. Awards are to be given to the grand champion and runner-up, and to the anglers who catch the largest snook and redfish. The field is limited to 30 boats. Nov. 4-6, Key Largo Robert James Sales Redbone Celebrity Tournament. Celebrities join other anglers to catch bonefish and redfish to raise money for cystic fibrosis research in the final event of the annual Redbone Celebrity Tournament Series. Contact: 305-664- 2002 or [email protected] org.

Dec. 1-4, Islamorada Islamorada Sailfish Tournament. The first leg of the triple-crown Florida Keys Gold Cup Championship series is the only tournament in the series to offer a junior division for anglers age 16 and younger. Contact: 305-522- 4868 or [email protected] aol.com