Pagans wore holly in their hair to ward off evil spirits and gave it as gifts in honor of the winter solstice at the Saturnalia celebration. Christians took advantage of its winter green-and-red colors, removed one ‘l’ and called it holy, comparing it to the crown of thorns and sacrificial blood. But don’t eat the berries or let your dog eat them. For humans, the berries will cause vomiting and diarrhea and purge the system even if it doesn’t need purging. Birds love the berries especially after the fruit freezes in the winter and becomes soft for eating in time for the spring migration. Its evergreen branches also provide protection for birds in the winter. 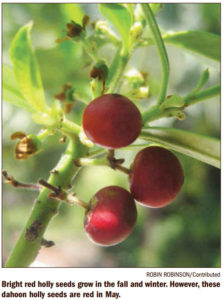 As dahoon holly, which is native to the southeastern coast of the United States, it is related to the poison ivy family and causes skin rashes. But a tea that is full of vitamin A, C and antioxidants can be made out of the leaves. There are 400 species of holly worldwide. That is because its habit of growth is not fussy. It likes damp ground but can withstand a drought or a short period of flooding. It may be a 30-foot tree or maintained as a shrub. Dahoon holly leaves are 3-inch-long alternate oblongs with a slight serration on the end. The more sun it gets the thicker are its leathery leaves. Its light, airy form increases its resistance to high winds and storms. There is no litter problem. Small, pale-yellow flowers form on the stems and at the crotches of branches. The four-lobed corollas turn into drupes of 10, with green fruit that turns bright red during the winter. The flowers provide nectar for a tasty bee honey. The quarter-inch round fruit is the perfect size for migrating birds. The fruit is only found on the female tree, so it is best to plant several trees and hope that there is one of each. The girl needs a guy to make red berries. Each red fruit has four tiny seeds inside. Trunks are a lovely palegray and attract lichens and epiphytes to their 12-inch diameter.

Dahoon hollys can be clipped into a hedge and used as a screen. They are suitable to be a specimen tree with their showy red winterberries. They can be grown in a pot on a deck. On the highways, they are used as median plantings. They thrive on streets and in cutouts on sidewalks, as they are tolerant of urban areas. They have also been successfully grown as bonsai. To propagate dahoon holly, it is best to take cuttings and root them. Layering, a more complicated project, is also effective. The seeds are dormant from two to three years before they sprout. It has no serious diseases, but people harvesting its branches for Christmas frequently must be careful not to destroy it. If it is cut down it will regenerate from its roots and become a bush with many trunks.

Key West Master Gardener Robin Robinson was a columnist for the Chicago Daily News and syndicated with Princeton Features. Her books include “Plants of Paradise” and “Roots, Rocks and Rain: Native Trees of the Florida Keys.”