The white-crowned pigeon population in Florida is estimated around 7,500 pairs, according to the National Audubon Society. The migratory species is designated by the state as threatened, mainly due to the degradation of its preferred habitat of hardwood hammocks and mangrove islands situated throughout the Florida Keys. At the Key Deer National Wildlife Refuge in Big Pine Key, lead wildlife biologist Kate Watts heads a pigeon monitoring program that she said will continue to provide data for possible additional regulations of the bird in the future. And for the first time, due in part to a lack of federal funding, among other issues, the refuge is reaching out to local volunteers interested in helping with the process by monitoring nesting activity. The program runs from mid-May through August. “We are always looking at engaging more of the community,” Florida Keys National Wildlife Refuges Complex Manager Dan Clark told the Free Press last week. 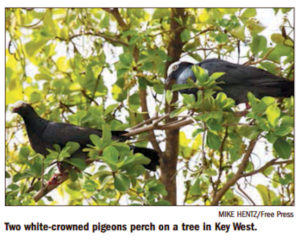 White-crowned pigeon congregate mostly in the Florida Keys, Florida Bay and Biscayne Bay, according to the Florida Fish and Wildlife Conservation Commission. They are also occasionally found on mainland Monroe County and Miami-Dade County. Outside of the U.S., they frequent the Bahamas, Greater and Lesser Antilles, and the Caribbean coasts of southeastern Mexico and Central America. They are protected in the U.S. under the Migratory Bird Treaty Act and are important locally for dispersing seeds from such tropical trees as pigeon plum, strangler fig and poisonwood, which helps keep hardwood hammocks diverse. But in the Bahamas, they are often hunted for food — current regulations there allow a 50-bird bag limit daily during its fivemonth open season from October through February. 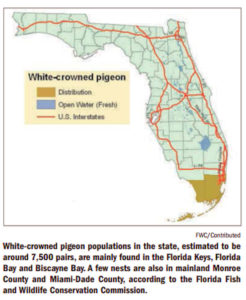 “Their population is considered vulnerable [in the U.S.],” Watts said on one of the reasons they conduct this program that has been in the works for quite some time. White-Crowned Pigeon monitored by the refuge use roughly 20 to 25 islands around the Lower Keys as nesting grounds. Thirteen of them, which range from east of Bahia Honda to Key West, are core congregation spots and it’s where the program focuses its counts on. Watts said the monitoring proceeds like this: Depart at 7 a.m. from one of three designated areas in the Lower Keys, stake out around certain islands to count male pigeons coming and going via binoculars and then return to shore around 11 a.m. “As soon as the sunlight comes up they are off,” Watts said. “And we’ll observe them flying.” Male pigeons roost on foraging ground where fruiting trees are plentiful. In the early morning, they then fly back to the nesting ground to feed their young. Watts said she will more than likely do trips three days out of a week, every other week. Those interested in volunteering — they’re looking for around a half-dozen — must be able to handle an ocean kayak and binoculars. Clark said volunteers with this program have the opportunity to see areas not typically visited, they learn quite a bit during the bird-counting process and they contribute to the research done at the refuge. The monitoring happens mostly within the Great White Heron and Key West national wildlife refuges.

For more information on becoming involved with this program, contact Watts at . Volunteers should indicate whether their interest lies in Big Pine Key, Cudjoe Key or Key West. The refuge’s visitor’s center can be reached at 305-872-2239 as well.

While many folks associate cactus with the sand and heat of a desert in the western part of the United States, South Florida and the Florida Keys are home to six species of native cacti. In this week’s edition of Nature’s Corner, we will introduce you to two native Florida Keys cacti: the barbed-wire cactus…

At its December meeting, the Florida Fish and Wildlife Conservation Commission (FWC) approved draft language and directed staff to continue working on diamondback terrapin conservation proposals that are part of a larger approach to prevent further decline of the species.  Throughout their range, diamondback terrapin populations are in decline due to a variety of issues,…

Mote Marine Laboratory and Aquarium is excited to announce an expanded lineup of summer camps. Mote Summer Camp 2017 offers more opportunities for kids to learn about their local waters, from the beautiful Sarasota Bay to the Florida Keys, in a fun and engaging way. Registration is open now for summer camps from June-August. Ages…

The lionfish is a highly-destructive non-native species in the Gulf of Mexico, which has few natural predators except, apparently, other lionfish. Source: Lionfish control efforts getting a boost from other lionfish | AL.com

Here’s something you don’t see every day: divers and marine conservationists hunting one of the world’s most beautiful fishes. As unlikely as this may seem, this scene is becoming more prevalent since the introduction of exotic lionfish in the Gulf States. Lionfish are an invasive species from the Indo Pacific that were introduced into Atlantic…