The first mention of Conch Key and its baby sister island to the southwest, Little Conch Key, can be dated back to the mid-19th century, according to local historian Jerry Wilkinson. The two islands were first documented in the 1849 memoir of F.W. Gerdes, “Reconnaissance of the Florida Reefs and All the Keys.” “The first islands between Duck Key and Viper Id. [Long Key] are named Conch Keys,” Gerdes wrote. Aside from that, not much else is known about each place until roughly one hundred years later in the mid-20th century. “There wasn’t much there,” Wilkinson said of the two islands while recalling his first drive down to Key West in 1947. 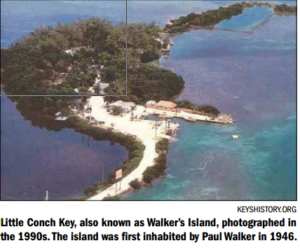 Neither island, according to a recent county-funded project, had remnants of early Indians inhabiting either location, according to Wilkinson. Conch Key was used as a construction campsite by the Florida East Coast Railway, but, according to Wilkinson, there isn’t much documentation of that use. At that time, the property consisted of a log cabin, two cottages and a pump house. Wilkinson said the cabin was more than likely used by the state when constructing the second Overseas Highway in 1938. In 1944, Frank M. Coward purchased the roughly 5-acre island from the state for $11,000. He built a house there as well as had an accompanying boat yard and marina. He passed away in 1966. The property was then bought by E.V. Jones and his wife, Ruth. According to Wilkinson, Jones is credited with starting the volunteer fire department there, which is still around to this day. He also organized a chapter of the Key West Red Cross, which served the community there during Hurricane Donna in 1960. Wilkinson said that up until about 1952 there were very few residents of Conch Key.

Around that time, though, similar to that of the Upper Keys, the area experienced a population boom. One contributing factor to all of that, according to Wilkinson, was the opening of Coral Shores School — the first public school outside of Key West. Some of the first residents of that island included the Liebys, Jones, Hunts and Doolittles. Nowadays, Conch Key, at mile marker 63 on both sides of the Overseas Highway, consists mainly of mobile homes and townhouses, vacation rentals, residential homes, an inn and marina, a few fishing charters and the same county-run volunteer fire department. Going south on U.S. 1 less than a mile from Conch Key is Little Conch Key. At one time it was known as Walker’s Island — and still is by some longtime area residents. It got the name after being purchased by Paul Walker for $6,000 in 1949, when the state put it up for sale. He and his wife used the island as a weekend getaway, barging a cottage to the property that would serve as their residence. According to Wilkinson, the couple made it their fulltime home in 1951. Walker eventually built five extra cottages on the property, which he marketed as vacation rental units. Those staying on the island would park on the Overseas Highway and be ferried over. A causeway carrying a water line and electricity were added later. However, Hurricane Donna and then Hurricane Betsy in 1965 washed that structure out. Little Conch Key, currently, at mile marker 62.2, oceanside, is still a private island boasting a fair amount of vacation cottages with amenities.

To learn more about the history of the Florida Keys, visit Wilkinson’s site keyshistory.org.