The failed Port Bougainville housing and marina project from the late 1970s and early 1980s that is located within Dagny Johnson Key Largo Hammock Botanical State Park will soon be a thing of the past. 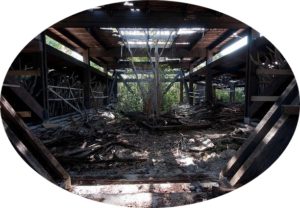 Work began there last month to raze what remains of a planned 406-acre development of condominiums, townhomes and yacht basins. It will include removal of the leftover housing structures as well as the bridge/tunnel, tennis courts and most of the asphalted areas, according to a park official.

Other vestiges of development on the property farther up County Road 905 are also targeted for removal.

The 2,421-acre Dagny Johnson property, overseen by Pennekamp park, was acquired by the state in 1982 in order to preserve this large stand of subtropical hardwood hammock.

The demolition work at Dagny Johnson, which has shut down all public access to the trails since March 14, is expected to be completed by mid-July.

Once the demolition portion of the project is complete, the work calls for the placement of 300 native plants in those areas. Rice said they have also already been discussing adding extra foliage on top of that through volunteer efforts. They expect the spreading of seeds to occur naturally, too.

“It will be a little mix of all of that,” Rice said.

The demolition, according to Rice, is being done mainly for safety reasons. The majority of the structures have fallen apart over time. Although signs are posted warning park goers of off-limit areas, Rice said many still explore the crumbling structures during the day as well as at night.

Aside from that, according to Rice, removing all the leftover Port Bougainville structures and some asphalt provides more habitat for native animals such as the endangered Key Largo woodrat that calls the area home. The park’s trailhead will continue to remain paved, though, and that will run about a half-mile in before transitioning into natural backcountry trails.

Rice pointed out that the demolition will also create new trails to park goers that were previously off-limits at Dagny Johnson.

The project is being handled by the Naples-based Earth Tech Enterprises Inc. Monroe County supplied just over $700,000 toward the project as part of mitigation fees for the Key Largo Wastewater Treatment District’s sewer plant installation. Rice, though, said the funds won’t fully cover the complete demolition and that the park also is using funds from the Florida Department of Environmental Protection’s Division of Recreation and Parks.

During the length of demolition, according to Rice, all of the trails starting at the mile marker 106 entrance to Dagny Johnson will remained closed to the public. However, those wishing to still use the northern end of the park have access to a paved trail roughly a mile south of the Card Sound Road and County Road 905 intersection. A backcountry pass is needed for entrance, but Rice said those will be free-of-charge during the demolition and can be picked up at John Pennekamp’s main ranger station.

Also on the park’s radar, Rice said demolition of the Cold War-era Nike Missile radar base remnants at the north end of County Road 905 will happen in the future. It is also located inside Dagny Johnson’s boundaries.

“No funds have been identified for that as of yet though,” Rice said.

Demolition is to include, according to Rice, the main administrative/barracks building, a basketball court and most of the asphalted areas. However, the missile silo, radar tower and a couple of other structures will remain, he said. They will be incorporated into an interpretive backcountry trail featuring posted information about their historical significance.

The Nike Missile base also had an adjacent launch area located in what is now the Crocodile Lake National Wildlife Refuge, located on the other side of C.R. 905. All that remains there, according to refuge Manager Jeremy Dixon, are three bunkers.

He said while the federal refuge has removed other parts of the defunct base such as old buildings over the past 15 years, there are no plans for demolition of anything else. Their current state, according to Dixon, doesn’t really affect the natural environment much.

“They will probably just stay there for a while,” Dixon said of the bunkers.

The 6,686-acre refuge, like Dagny Johnson, was also once targeted for development before public acquisition in 1980.

A team from Florida Keys National Marine Sanctuary finalized a project to restore living coral colonies on a damaged patch reef near Cheeca Rocks that was injured when a rogue buoy dragged across it. Boat groundings, anchors, chains and other items that drag along the seafloor can damage or destroy a reef’s complex formations —…

Most people are familiar with the group of organisms called fungi, owing to the mushrooms that you can find in grocery stores. In addition to being a delicious ingredient used in many culinary creations, fungi play a very important role in the ecosystem. This week we will dive under the leaf litter to learn about…

Most of us have heard the saying, “Build it and they will come.” Can we apply this to attracting butterflies? If so, what are we building? The answer to the first question is definitely yes. The answer to what we are building is a little more complicated. Before you create a butterfly garden you must…

BY JOSH GORE Free Press Staff The roseate spoonbill, a wading bird long enjoyed by birdwatchers, recreational boaters and anglers, appears to be gradually leaving Florida Bay for less salty nesting grounds, according to Audubon researchers. The spoonbill nests during the dry winter and spring months. And because it is especially dependent upon the…