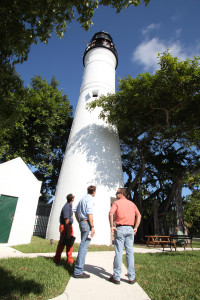 Key West lighthouse was decommissioned back in 1969. But it recently got a thorough restoration, from the railings around the top to the paint on the sides.

Officials from the lighthouse’s current stewards, the Key West Art & Historical Society, weren’t sure what to expect when they hired a restoration firm that specializes in old lighthouses. They thought maybe the firm would set up a giant scaffold around the 86-foot tower.

Instead, “they hung off it like a window washer,” said Michael Gieda, the society’s executive director. “They had a platform that they hung down over the side and they washed it, cleaned it, primed it, prepped it and painted it.”

And the lighthouse, which was built in 1848 and extended another 40 feet in the late 1890s, got more than a new paint job.

“They completely scraped down all the metal on the observation platform, the lens room, the roof, patched where all the rust had corroded through and made the metal in those areas really fragile,” Gieda said.

The project, which also includes restoration and improvements to the Keeper’s Quarters on the same property, cost $665,800 and was partly paid for by the county’s Tourist Development Council. That agency collects taxes on vacation lodging in the Keys and uses the money for tourism promotion and capital projects that appeal to visitors.

While it no longer serves as a navigational guide, the Key West Lighthouse has several historical claims to fame. It is home to two Fresnel lenses, which helped throw the light over great distances. One of those lenses is at the top of the tower; the other, which originally was on the light at Sombrero Reef, is in the property’s visitor center.

The lighthouse is also notable for being in the middle of a residential neighborhood — right across Whitehead Street from the Ernest Hemingway Home & Museum — and for having a series of female lighthouse keepers during its working life.