Resorts in the Florida Keys are opening and renovating faster than you can say “Ernest Hemingway.”  What does Hemingway have to do with it?  The iconic American author lived in Key West during the 1930s, when he penned The Snows of Kilimanjaro and To Have and Have Not, and immortalized the free-spirited isle in literary lore.

A lot has happened since, and the heady combination of sun, sand and sea now inspires the Netflix drama Bloodline. Here is a look at the 2015 resort boom in the Keys, a nearly 200-kilometre archipelago of laid-back tropical islands that flourish between the sparkling aquamarine waters of the Atlantic Ocean and the Gulf of Mexico.

The temperature averages 27.7 C year-round, water sports from paddle-boarding and snorkelling to deep-sea fishing are virtually unparalleled, and there’s no shortage of beach-inspired relaxation among the guava trees and coconut palms.

We start in bohemian, artistic Key West, the southernmost town on the U.S. mainland.

The new Gates Hotel Key West is a 245-room boutique property with an air of “old Key West” mixed with minimalist design, photography from a local gallery and contemporary cuisine.

The Gates’ expansive property is only partially open, but it has already created major buzz. The first building — 100 rooms and a pool with cabanas — is operational, and in early 2016 there will be 145 additional rooms, another pool, a pool bar and a restaurant. The hotel is situated at the entrance to Key West, across the street from the Gulf of Mexico. 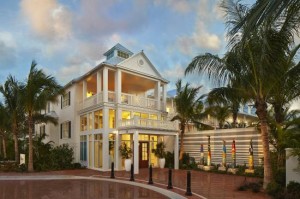 The Marker Waterfront Resort is a year-old boutique hotel that faces the famous Key West harbour in the Historic Seaport. With chic guest rooms built around a courtyard in the style of linked townhouses, the Marker has three swimming pools (one for adults), bountiful landscaping, poolside cocktails and casual fare at Cero Bodega. This is a great location, near busy Duval St.

You can relive some Hemingway lore at the Ernest Hemingway Home and Museum — not to mention Sloppy Joe’s Bar, where he favoured extra-dry martinis, double daiquiris and absinthe.

The Southernmost Beach Resort Key West is a new fusion of four properties: the Southernmost Hotel in the U.S.A., Southernmost on the Beach, La Mer and Dewey House. The 261 guest rooms are in different buildings connected by palm-lined pathways, sitting along or near the Atlantic beachfront. There are various accommodation styles, three swimming pools (one for children), four bars, a restaurant and a private pier. 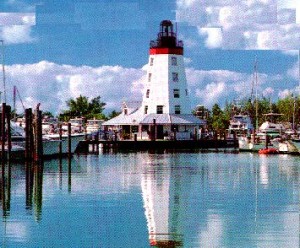 The Faro Blanco Lighthouse has been a landmark of Marathon since the 1950s, and now it is at the heart of the new Faro Blanco Resort and Yacht Club on the Gulf side of the Keys.

The village-like Faro Blanco features the upscale 125-room Hyatt Place hotel, with two pools, a meeting space and a waterfront restaurant called Lighthouse Grill. Boaters can arrive in style at a 74-slip marina capable of handling vessels up to 100 feet.

The Banana Bay Resort and Marina, a darling, intimate property facing the tranquil Gulf in Marathon, has renovated its pool area, lobby and approximately 60 guest rooms, which are redone in nautical white and blue. Life is laid-back with hotel facilities such as the poolside tiki bar, a heated freshwater pool, an outdoor whirlpool, a tennis court and a marina, which has 34 transient slips ranging from 20 to 60 feet and an array of water sports. 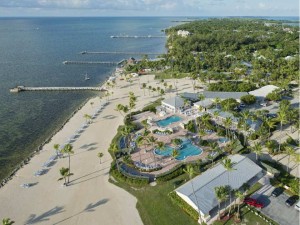 In Islamorada, the Islamorada Resort Company has relaunched four affiliated properties, all facing the Atlantic, and all with water sports galore: Postcard Inn Beach Resort at Holiday Isle, which offers steaks and burgers at Shula’s 2; La Siesta Resort, an all-suite hotel reopening in December after renovations; Pelican Cove Resort and Marina, also totally renovated; and Amara Cay Resort, formerly the Islamorada Resort, completely redesigned with a new look and services.

The landmark restaurant Marker 88, also in Islamorada but facing the Gulf for a different view, is a great place to go for glorious sunsets and fab feasts of crab cakes, conch chowder, grilled fish or steak, and the signature island treat, Key lime pie.

Nearby, the casual, comfortable Islander Resort, a Guy Harvey Outpost Resort, upgraded its accommodations: 114 oceanfront rooms including lanai villas (like mini-cottages) and the new Beach House of oceanfront suites, as well as 25 townhouses on the Gulf side. Harvey is a modern-day marine specialist whose hotels are a forum for his sea-life art, ocean research and conservation ventures. The resort has informal patio dining and a Guy Harvey beach boutique.

The elegant Playa Largo Resort and Spa, opening in early 2016 in Key Largo, will be a member of the posh Marriott Autograph Collection and the first new build in town in 20 years. It will be a sprawling, luxurious waterfront property facing the Gulf of Mexico with a private white sand beach, a marina, multiple bars and restaurants, a full-service spa and a wedding-worthy ballroom.