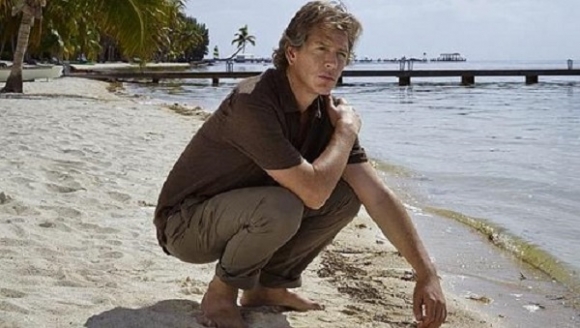 Ben Mendelsohn’s career started in the early 1980s, but it wasn’t until a few years ago that the fortysomething Aussie exploded onto the scene. His well-praised performance in David Michod’s Australian crime drama Animal Kingdom led to turns in both high-profile indies (The Place Beyond The Pines,Starred Up) and tentpoles (Exodus, The Dark Knight Rises), all leading to his star-making, black-sheep brother role as Danny Rayburn in Netflix’s taut thriller Bloodline. Mendelsohn isn’t a household name, even with all this success, but 2016 might change that: The actor has just received a Golden Globe nomination for his work on Bloodline and next December he will be seen in the Star Wars spinoff Rogue One.

As with many of your recent film roles, you tread into very dark emotional territory in Bloodline. Would you consider that to be one of the greater challenges of acting—going to those places?

If that’s not the challenge, what is?

The biggest challenge is always the environmental challenge that comes with working on a set. And the challenge is to know whether or not what you’re doing is effective, in a wider sense. You might get a feeling that, from day to day, things are good, like, “That scene felt good.” You might know you’ve had a day or two’s good sailing but you’re not completely sure whether the ship is headed where you want it to head. You can set out for this place, but that’s the most difficult thing—not being able to know that along the way until it’s all sort of been finished and it hits where it hits.

What is your acting process? Having acted since a young age, has that process changed much over time?

Yeah, it has changed over the years, I think. I learned on the job, first of all. And then I became very entranced by the people that were doing the Method thing from the 1950s to the ’80s. And then I feel like I vaguely tried some of that—I’m an unschooled person. So after that I would say the next step was to try and just feel stuff more as it’s actually occurring, rather than going in with a battle plan. That’s where it’s got to, more or less, at the moment.

You grew up with two siblings and two half-siblings and now have a family of your own. Did your own family history and understanding of family dynamics factor into your work on Bloodline?

Well, you always take whatever it is, particularly if you’re doing a contemporary, personal style of writing, then you’re going to be bringing whatever you got. I have a family history, but I’m past that point, in a way. I know about all of that and I’ve mined all of that territory already. I bring what I am, and then you don’t have to do that. All you’ve got to do is play the scenes and the rest of it is the broader canvas.

You have great chemistry with the entire cast, but what was it like working with Chloe Sevigny, who plays your love interest?

How was it shooting in the Florida Keys? You’re back there now shooting Season 2, correct?

We are still doing the season, yes. It’s a paradise but it can also be incredibly challenging to shoot there because of the elements. When it gets hot, it getshot. And also it’s very changeable. Storms can come in and out of there at a great rate. The days can be pretty unpredictable there. But it’s easy to be in that world when you’re there for several months. It’s very, very easy. Because you do, in effect, become a sort of de facto local after a while.

You’ve described Bloodline as having the qualities of a great novel. What are some of your favorite novels, and do you find much time to read these days?

Yes and no, as far as finding the time. It’s the old Crime And Punishment, I think.Bloodline’s got more than some parallels to a bit of the old Fyodor. Another favorite of mine is more of a dialogue kind of novel called Darkness At Noon by a guy named Arthur Koestler. Crime And Punishment was just a mind-blower at the time that I read it. I do think this has got very novelistic sensibilities in that regard. But yeah, I’ve been reading a lot of history hoo-ha in the last little while. It’s hard to have two immersive fiction things going on at the same time so I don’t do it that much when I’m working, and I often won’t read scripts while I’m still working, either.

What can you tell us about Season 2 of Bloodline and where are you in the process of shooting?

We are just over half way. And what can I say about it? Not much. Strap on your seatbelt again. That’s all I can say.

Are you excited about the way in which the story is moving forward? I’m sure that for a lot of people it’s difficult to see where things are going after Season 1’s explosive and definitive ending.

Oh, I’m very excited about that. I think that in a lot of ways the entire situation with Danny is really like a prologue. These guys, the show creators, they’re kind of masters at the art and they will unfurl something pretty special.