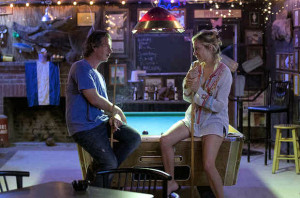 Most people know “Bloodline,” the widely acclaimed Netflix series about a family that’s “not bad people but we did a bad thing,” is coming back for its second season, likely in May.

But some plot twists in the series, being largely filmed at locations throughout Islamorada and the Upper Keys, are just now slowly leaking out.

When Season 1 ended, John Rayburn (Kyle Chandler) had killed off his brother, the family black sheep Danny (Ben Mendelsohn) who had came back to the Keys looking for redemption — and revenge. John burned Danny’s body on a boat, trying to make it look like an accident. But that doesn’t spell the end.

Danny will be back in Season 2 via flashbacks. Joining the cast is John Leguizamo, playing the role of a Miami gangster named Ozzy Delvecchio who heads to Islamorada to collect what Danny owed him.

It’s good Mendelsohn is returning. He was nominated last year for an Emmy for best supporting actor in a drama series and this year he’s nominated for a Golden Globe for the same thing.

Chandler of course is returning, as is Chloe Sevigny, who was pretty much the only person Danny really cared for; along with Rayburn clan members played by Sissy Spacek, Linda Cardellini and Norbert Leo Butz.

Of course, the Moorings Village and Spa resort returns as the Rayburn family home. Not returning is Sam Shepard, the patriarch of the family who died in last season’s fifth episode.