Be honest: do you ever give your lifejacket some TLC or do you always assume that it will be there for you, like a doting dog? There are times when maximum buoyancy is a life and death matter, such as when a hydraulic is making like a washing machine and treating you like a dirty, old sock or if you end up gasping in frigid water on a gray October day. PFDs, like everything else, have finite lives. If it’s to save your life one day, prolong its life as much as possible, and when the time comes, Replace your PFD.

Lili Colby, the Chief PSDiva at MTI Adventurewear, which makes nothing but lifejackets and has done so for 25 years, understands how many paddlers abuse their products. Many people come back tired from a paddling trip, and simply throw their lifejackets in the corner of their garage or in the bottom of their boat.” 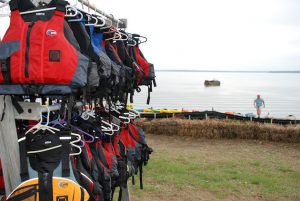 Tossed into a dark corner, PFDs can turn into a petri dish for mildew, which can both break down fabric and flotation and make them less likely to be worn in the future. So, how do you keep your PFD at peak performance and avoid the funk?

Colby said, “It’s all about how well you take care of it. After each use, rinse it out with freshwater, and not just after saltwater paddling. Even the salt from sweat can reduce its lifespan. Then dry it out properly. Put it on a hanger and open the straps to let air get to it. Dry it right side out and then inside out.”

Just as it’s best to store a boat inside, so it goes with your lifejacket too.

“Store them inside a boathouse or garage, out of the sun. Sun degrades the material. Fading is the first sign your jacket is getting worn out. Fading might not mean your jacket is compromised, but it’s a sign it’s headed that way.”

What are other signs that it’s time to shop for a new lifejacket? Ripped fabric and frayed webbing are good indications.

“There are expensive and inexpensive lifejackets,” Colby said. “The latter use cheaper foam, which breaks down. It can become dry and some have been recalled.”

A lack of quality can mean your dream of surviving a spill turns to literal dust. Coast Guard inspectors in Key West, Florida recently discovered more than 60 lifejackets whose flotation had crumbled, broke, and even escaped the fabric. These lifejackets had been properly stored away from sunlight and kept dry, but the unicellular foam likely degraded due to high temperatures. 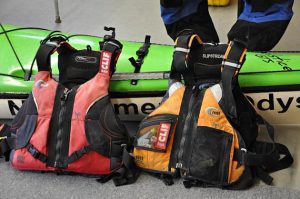 The Coast Guard urges boaters to be alert to compression of a lifejacket’s flotation foam, which reduces buoyancy and can be caused by years of storage. Foam that is hard, stiff or brittle is also problematic. A simple test is simply squeezing it to half its thickness. It should return to its original thickness shortly. Another indicator of an expired lifejacket is wrinkling of the fabric covering the foam, which suggests the flotation foam has contracted, becoming less buoyant. The Coast Guard warns that lifejackets manufactured by The Safeguard Corporation should be especially scrutinized in the preceding ways.

“If you bought something cheap, poke at it,” Colby said. “If your finger goes through it, you need a new one. Quality foam tends to keep its floatation qualities.”

Even if your lifejacket’s floatation is fully functioning, if it’s too tight or plain old ugly, you’re unlikely to wear it. “Does it still fit you? People don’t want to wear moldy, ill-fitting life jackets. Make sure it’s comfortable.”

A fully functioning lifejacket isn’t just an insurance policy. It’s the law. Mary Snyder, VP of Marketing at Absolute Outdoor/Onyx, said, “The law states that your PFD must be in good condition before you go out on the water. If it is not in good shape, it should be destroyed and a new one should be purchased.”

Just as you change the battery in a smoke detector, do the same with your lifejacket. Snyder said, “Another recommendation by the U.S. Coast Guard is to test your life jacket at the beginning of each season.”

Lifejackets have finite lives. Know when yours is worn out and replace your pfd.

Source: When should you replace your PFD? | Canoe & Kayak Magazine