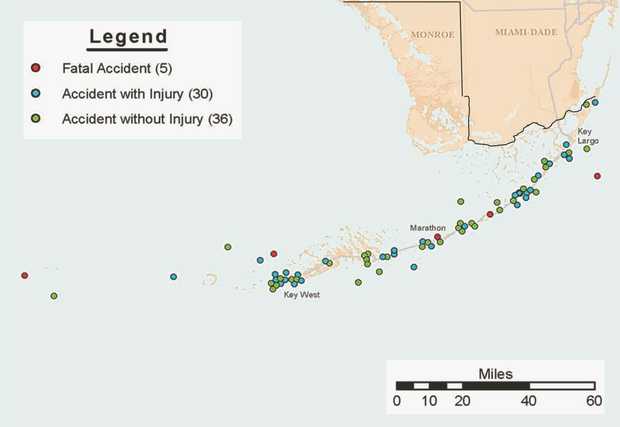 In a deadly year on Florida waters, the Florida Keys remain one of the most dangerous places for boaters. Five people were killed on waters near the Keys in 2014, second statewide only to the 10 people who died in Miami-Dade County, the Florida Fish and Wildlife Conservation Commission says in its 2014 Boating Accidents Statistical Report, released Friday. Florida has 67 counties. The number of reportable boating accidents involving death, injury or more than $2,000 in damage dropped from 2013 statewide by more than 100, from 736 in 2013 to 634 in 2014. However, Florida’s boating-related deaths surged by 18 percent, from 62 in 2013 to 73 last year. Monroe County’s five boating deaths matched the Keys total for 2013. Dive or snorkel deaths do not count toward the boating statistics. “There are more people and more boats,” said FWC Officer Bobby Dube, an information officer for the Keys. “Access to the water increases every year,” Dube said. “People can buy a boat or personal watercraft in the morning and be on the water that afternoon. You’ve got to be careful.”

Monroe County ranks second statewide on the notorious “Top 10 Counties” for nautical mayhem with 71 boating accidents, causing more than $1.2 million in damage. Two photos in the state report depict an anchored 30-foot sailboat impaled by a 16-foot open fisherman boat in Newfound Harbor off Big Pine Key in June accident. “It’s Safe Boating Week but safety is always the top priority on any day in the Keys,” Dube said. “Have a designated boat operator because there is zero tolerance for boating under the influence. Make sure to check the boat for required safety gear.”

Miami-Dade had a state-high 79 accidents with $2.2 million in damage. Pinellas County near Tampa was third with 53 accidents and four on-the-water deaths.Nationally, the U.S. Coast Guard logged 610 boating deaths in 2014 and no state had more than Florida. California was second with 38 deaths. Florida leads the nation in registered boats with 899,635 registered vessels, and may have a million more unregistered craft (canoes, kayak, paddleboards and rowboats). “This [unregistered] segment of the boating population appears to still be growing,” the report says. “Our waterways show the strains of congestion as each year brings more residents and visitors to utilize our abundant water resources.”Other statistics from the 2014 FWC report:May is the highest month for boating accidents (90 in 2014).

Drowning is the leading cause of deaths in fatal boating accidents.Alcohol use or drug use was linked to 12 percent of fatal accidents.Monroe County saw 17 personal-watercraft accidents in 2014, with one death and five injuries. Only Pinellas County (19 accidents, no deaths) was higher in crashes. Statewide, there were 104 PWC accidents, the lowest number in five years.

Source: For boating mayhem, we’re No. 2 in Florida | News | KeysNet

This is the second video of MJ Hudson’s life on a houseboat in Islamorada Florida. MJ shows us new developments at his home, and adds some of his own personal philosophy. Photography and video by Tedd Carroll. Houseboat Living.

We wanted to touch a little piece of movie history, so we headed down to Key Largo, Fla., to ride on the African Queen. The African Queen is a 30-foot steel-hulled steamship built in 1912 as the S/L Livingston to navigate the upper Nile River. John Huston leased it in 1951 to make the movie…

Tired of the hustle and bustle of your life? Have you tried PaddleBoarding? Charlie make it look easy in this video of one of his adventures in Big Pine Key. You can choose to get a workout or just relax and enjoy the beautiful outdoors in the paradise we know as the Florida Keys.

Nearly 200 square miles of Florida Bay waters could be managed as no-motor or idle zones under Everglades National Park’s new management plan released Friday. Park staff intends to designate 102,838 acres of shallow water — about 160.7 square miles — as “poll or troll zones” where use of outboard motors would not be allowed. Another…

For the past few months, Kenneth Lohmann has been building markers and placing them on rocks in the waters outside his bayside home in the Hammer Point neighborhood of Tavernier. The markers are to safely guide boaters away from the dangerously shallow water next to the area’s canals. The longtime Florida Keys resident turned 90…